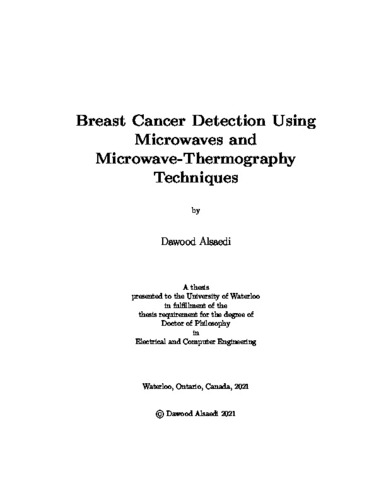 The accelerated growth in Microwave Imaging (MWI) and Microwave Detection (MWD) is driven by microwave ability to penetrate materials that are considered opaque at a shorter wavelength. This elevates MWI potential to cover a wide range of applications, including but not limited to security checking; civil and industrial operations; and medical diagnostics. Involving microwaves in the biomedical eld relies on two additional microwave features: a) a microwave interacts differently with biological tissue, based on the tissue's electrical properties; and b) a microwave is considered as non-ionizing radiation, thus it presents low to no risk to biological tissue. This has instigated the implementation of microwaves in different areas of biomedical diagnostics, such as brain haemorrhages, meniscus tears, and breast cancer detection. The first part of this dissertation presents a microwave thermography hybrid breast cancer detection technique consists of a microwave radiation source, an infrared heat detector, and a machine learning algorithm. Since many conventional MWI approaches collect transmission signals along with re reflected signals, this technique is based on recording the electromagnetic wave after passing through the entire breast. A sensitive lm is placed behind the breast (opposite direction of the radiation source) to absorb the transmitted wave that propagates according to the dielectric properties of the breast tissue. The captured heat pattern is used as a guide for determining the presence of an anomaly within the breast tissue. Machine learning is used to enhance the detection accuracy and to provide further information about the tumor's features, such as size and location. The proposed modality shows a capability to detect and determine the size and location of an artificial tumor with a 5 mm radius and a 2:1 permittivity contrast with normal tissue. A new breast cancer detection modality that uses a metasurface as the imaging medium and a microwave radiation source is introduced in the second part of this thesis. In contrast with previous microwave imaging techniques, or imaging techniques in general, instead of providing an image of the internal breast tissue (i.e., a slice/cut through the breast), the proposed technique provides an impression of the breast tissue. The impression which, in principle, is similar to the impression captured by an x-ray lm, is captured by a metasurface, which is an ensemble of electrically-small resonators. Each cell records the strength of the incident power that impinges on it. This metasurface may be viewed as analogous to a low-frequency scaling of the x-ray lm. The metasurface receives the transmitted energy through the breast, which resembles the mammography approach. While mammography faces a major challenge in detecting tumors in dense breasts, the metasurface proposed here utilizes a low-frequency radiation source, thus allowing higher penetration through dense breast tissue. Similar to the first part of the thesis, by building a proper machine learning code, the detection capability is then enhanced by engaging a Convolution Neural Network (CNN) to determine the tumor's features. In the third part of this thesis, flexible-conformal metasurface films are introduced for utilization as a wearable breast cancer detection modality. This technique involves two metasurface arrays with electrically small and closely spaced resonators as a transmitter and receiver. The microwave radiation of the metasurface transmitter is received at the other side of the breast by the metasurface receiver to form an image of the received electromagnetic power. The receiver is expected to provide an electromagnetic energy pattern instead of an image that represents the breast's internal contents. The power pattern is influenced differently according to the electrical properties of the breast tissue, thus a unique power impression can be obtained for both a healthy breast and a breast that contains a cancerous tumor. By using flexible metasurface films, the antenna number penetration- resolution trade-off that limits the capability of conventional MWI techniques can be minimized. In addition, the necessity for antenna miniaturization to enhance the resolution can be avoided, and the long mechanical scan can be replaced with just a few scanning steps of the metasurface sheet.