Measuring and modelling soil erosion in agricultural systems: Evaluating the application of UAVs and SfM-MVS for soil erosion research 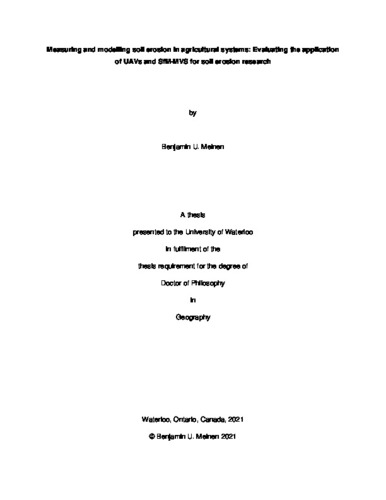 Soil erosion in agricultural systems is a pressing issue for agricultural sustainability. Accelerated rates of soil erosion from conventional agricultural practices continues to outpace the rate of natural soil regeneration, and the continued expansion of agriculture into highly erodible landscapes coupled with the threat of more intense precipitation events from a warming climate indicate that soil erosion will continue to be a serious environmental problem throughout the 21st century. While the processes driving soil erosion are well understood, the distributed and small-scale nature of erosional processes makes it difficult to quantify the severity of the erosion problem. Conventional measurement methodologies lack the spatial and temporal resolution to characterize soil erosion events at the farm-field scale. Our inability to accurately measure soil erosion events has resulted in soil erosion estimates being primarily based on modelling without field-based evidence to evaluate and validate modelling outcomes. To address this research gap, we explore a new state-of-the-art workflow for measuring distributed erosion processes using automated photogrammetric workflows (i.e., Structure-from-Motion Multi-View Stereo [SfM-MVS]) and optical imagery from an unmanned aerial vehicle (UAV). We experientially investigated the accuracy of the UAV SfM-MVS workflow for recreating the topography of an agricultural field using different aerial surveying techniques. Our results demonstrated that for a standard parallel-axis nadir UAV image acquisition, an RTK-GNSS ground control survey, a sufficiently dense deployment of ground control points, and the use of a self-calibrating bundle adjustment in an SfM-MVS software application, the vertical accuracy (RMSE) of pointclouds converges on 2–3× the ground-sampling-distance of the optical imagery with a practical upper limit of 0.01 m. Our nadir aerial surveys had ground-sampling-distances of between 0.011 – 0.018 m, which resulted in pointclouds with a range in vertical accuracies of 0.021 – 0.039 m. This vertical accuracy constrained our workflow to measuring deep rill erosion, ephemeral gully erosion, and depositional zones; small-scale sheet and rill erosion processes could not be directly measured with our presented workflow. Applying the UAV SfM-MVS workflow to an agricultural field in Ontario, Canada, we were able to measure semi-distributed soil erosion processes using down-slope depositional zones as a proxy for up-slope erosion processes. Over the course of one year, 159.52 t of sediment was deposited down-slope, corresponding to an erosion rate of 18.83 t ha−1 yr−1; 86% of the total volume of eroded material was a result of intense storms during the corn growing season, with the majority of erosion associated with spring storms immediately following cultivation. During the winter months, despite the soil surface being barren after a moldboard plow, very little sediment was deposited down-slope. Soil erosion measurements collected using the UAV SfM-MVS workflow were then used to evaluate the predictions of the Universal Soil Loss Equation (USLE) and Water Erosion Prediction Project (WEPP). Model evaluations demonstrated that the WEPP had more accurate short-term predictions (i.e., 1-year annual and sub-annual) for a year of corn production. Long-term modelling with the WEPP for our agricultural study site predicted an average of 6.4 days per year with soil erosion events and 14.1 days per year with runoff events. Winter events and snowmelt constituted 70% of the average long-term runoff but winter runoff events were rarely associated with soil loss, which matched our in-situ observations and measurements. To further explore the spatial variability in distributed erosion processes, we used a series of very-high resolution DEMs derived from the UAV SfM-MVS workflow and a simple hydrology model to explore the impact of microtopography on surface runoff. Modelling results demonstrated that the orientation of tillage lines, surface slope, and maximum depression storage, all had a statistically significant impact on surface runoff. Our agricultural study site was at the highest risk of surface runoff and soil loss in the spring immediately following cultivation since the smoothed soil surface facilitated a high degree of landscape connectivity. Based on these results, we used our experiential knowledge of field-scale hydrology and erosion processes to additionally explore an up-scaled model implementation of the USLE for the entire watershed in which our agricultural study site was situated. We evaluated how different model user’s design choices and spatial conceptualizations of an agricultural systems affect predictions of soil erosion. We found a high degree of variability in soil erosion estimates at the watershed-scale, e.g., changing the implementation of a single USLE factor led to a range in model outcomes from 3.04 to 11.02 t ha-1 yr-1. This variability exemplifies the uncertainty associated with watershed-scale implementations of erosion models in the absence of a standardized and accredited model setup.