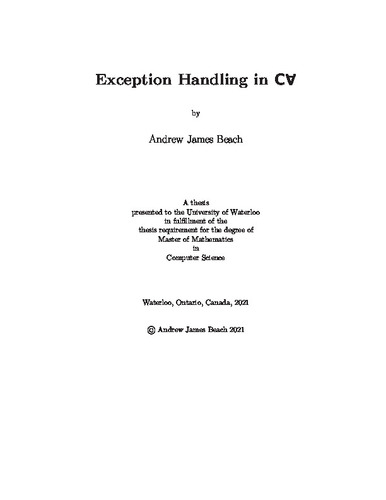 The C∀ (Cforall) programming language is an evolutionary refinement of the C programming language, adding modern programming features without changing the programming paradigms of C. One of these modern programming features is more powerful error handling through the addition of an exception handling mechanism (EHM). This thesis covers the design and implementation of the C∀ EHM, along with a review of the other required C∀ features. The EHM includes common features of termination exception handling, which abandons and recovers from an operation, and similar support for resumption exception handling, which repairs and continues with an operation. The design of both has been adapted to utilize other tools C∀ provides, as well as fit with the assertion based interfaces of the language. The EHM has been implemented into the C∀ compiler and run-time environment. Although it has not yet been optimized, performance testing has shown it has comparable performance to other EHMs, which is sufficient for use in current C∀ programs.