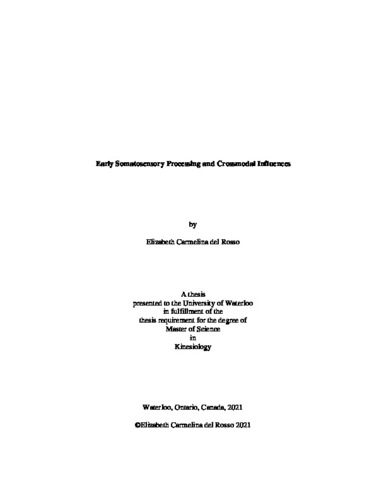 Sensory stimuli from distinct modalities are continuously linked together by the brain to create a cohesive percept of the surrounding environment—a process known as multisensory integration. Furthermore, sensory information from one modality has been shown to alter the processing of another modality. This phenomenon, now referred to as crossmodal sensory integration, has led to an abundance of research, with many studies reporting enhanced cortical responses when stimuli from different modalities (i.e., visual) occur in close temporal proximity to the onset of a tactile stimulus. Due to current COVID-19 pandemic, a time-frequency analysis (event-related spectral perturbation) of two related datasets (Faerman & Staines, 2019; Popovich & Staines, 2014) was performed in the current work. In both studies, participants were asked to attend only to crossmodal stimuli and to determine the amplitude of both the visually presented horizontal bars and vibrotactile stimuli, while electroencephalography (EEG) was recorded. Conditions involved several blocks of randomized trials with different temporal latencies between the onset of visual and tactile stimuli (i.e., 0-100ms, 100-200ms, 200-300ms). In addition, participants applied a force graded motor response using a pressure sensitive bulb, meant to represent the summation of both stimulus amplitudes. Researchers found that P50 amplitude was greatest in conditions where visual stimuli preceded tactile stimuli with later latencies of onset (0-100ms for Popovich & Staines (2014); and 200-300ms for Faerman & Staines (2019)). Given the P50 modulation reported in the studies above, the objective of the current work was to examine excitability changes of parietal cortex using de(synchronizations) in mainly the beta, alpha, and theta frequency bands, believed to occur in response to a task where both the timing and relevance of crossmodal (visual-tactile) events were manipulated. The rationale for this approach is supported by past studies that have demonstrated links between beta, alpha, and theta de(synchronizations) and a role in both sensorimotor integration and certain attentional processes (Barutchu et al., 2013; Lalo, Gilbertson, & Doyle, 2007; Siegel, Warden, & Miller). De(synchronizations) of neuronal activity are connected to the coupling and uncoupling of functional networks in the brain. Therefore, it is believed that repetitive and synchronous neuronal firing promotes the activation of functional networks because it increases the chances that neurons entrain each other in synchronous firing, and vice versa (Bastiaansen, Mazaheri, Jensen, 2012). With this background information in mind, the general hypotheses were that beta band (13-30Hz) synchronization would be greatest when a visual stimulus preceded a tactile stimulus by 100ms compared to when a tactile stimulus preceded a visual stimulus by 100ms, and that both theta and alpha synchronization would be influenced by the interaction of attention and top- down/bottom-up influences, represented by the attentional demand and the temporal relationships of the sensory processing stimuli. A one-way repeated measures analysis of variance (RM-ANOVA) confirmed a strong effect of stimulus for the theta frequency at frontal site(s), with Tukey’s post-hoc tests revealing a significant difference between the experimental condition where visual and tactile stimuli were presented simultaneously and the condition where tactile stimuli preceded visual stimuli by 100ms. A main effect of stimulus was also found for the alpha frequency range at central-parietal sites, with Tukey’s post-hoc test revealing a significant difference when visual information preceded tactile stimuli by 100-200ms and 200- 300ms. It is quite possible that the crossmodal nature of the task used in both experiments is driving, at least in part, the alpha-theta synchronizations discussed, perhaps in a similar manner to the modulations of specific ERP components (i.e., P50, P100) reported in previous studies; however further research must be conducted to provide clarity.