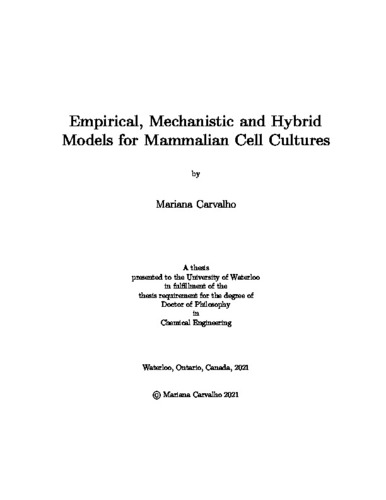 To reach the increasing demand for monoclonal antibodies the pharmaceutical industry has been looking into ways to optimize productivity. Monoclonal antibodies (mAb) are commonly synthesized in mammalian cell cultures. Chinese Hamster Ovary (CHO) cells are among the most used cells by the industry for mAb production. Changes in medium formulation used in cell culturing is a crucial factor among others for maximizing mAb productivity. Mathematical modelling is a useful tool for better understanding the behavior of each medium component on cellular metabolism and for developing new medium formulations by model based optimization. Mechanistic models, such as metabolic flux models and nonlinear differential kinetic models, have been used in the literature to study cellular performance. These mechanistic models are developed based on fundamental laws of mass balance and stoichiometric information. However, several assumptions and simplifications are done during model development due to the complexity of mammalian cells metabolism. For example, media formulations contain over one hundred chemical components and the effect of each component on growth and productivity is sometimes not well understood. On the other hand, empirical models have the potential ability to describe the effect of many metabolites using experimental data but they are expected to lack prediction accuracy beyond the data used for model calibration. Part of the lack of prediction accuracy of empirical models is related to the presence of many media components which may require many model parameters and thus tend to overfit the data. Following the above, this work presents novel extensions and applications of empirical, mechanistic and hybrid models that combine mechanistic and empirical terms. Dynamic metabolic flux analysis (DMFA) is a modelling approach that has gained attention in recent years due to its potential to describe dynamic cell behaviour while correctly accounting for metabolic network information. This approach assumes that the cell optimally allocates resources to maximize/minimize a biological objective function of interest. Although DMFA has been applied extensively to bacteria it has not been much investigated for mammalian cell cultures due to the relatively complex behaviour of the latter. Chapter 3 presents an extension of a Dynamic Metabolic Flux Model for mammalian cells with novel extensions to an earlier model that include i- prediction of biomass, ii- inclusion of cell death in the model, and iii- application for both batch and perfusion systems. The final DMFM model was proved very satisfactory, being able to predict the data with an average error of 15\%. Empirical approaches are used by the industry to develop media formulation. However, the reported empirical models are linear and they have not accounted for possible interactions among the components present in the cellular medium. Chapter 4 presents a new empirical approach that includes linear, two-way interactions and squared terms representing possible components interactions, including interactions with minor components present in the medium, such as vitamins, metals, etc. Due to the large number of components present in the media formulation, the resulting problem is defined as a high dimensional problem where the number of predictor variables $p$ is much larger than the number of observations $n$. The goal is to find parsimonious models to avoid over-fitting of the training data. A number of techniques were investigated to reduce the parameters such as Lasso and multivariate statistical methods. PCR and PLS model regressions were found suitable to address the high dimensional problem and their predictions have shown good fit with the data. The resulting PCR and PLS models were used for development of new medium formulation by robust optimization. Also, an approach that combines PCR and PLS regression with D-optimal design is presented to select a subset of most informative media to be used for media optimization thus reducing the required number of experiments. An alternative type of modelling approach involves the use of mechanistic models based on mass balances and kinetic rate expressions. When applying these models with different media formulations they often exhibit discrepancies between predictions and experimental data. A key source of error is due to lack of knowledge about the metabolic effect of minor elements. To correct for these errors hybrid models have been investigated in this thesis which aim to incorporate effect of minor elements by empirical terms into the mechanistic model of the major components. Following this approach Chapter 5 proposes the use of a hybrid model that combines a mechanistic model of amino acids, glucose, by-products and biomass with an empirical PLS based regression model that captures the effect of the minor media elements. The original mechanistic model is described by a set of nonlinear differential equations that uses kinetic terms of Michaelis–Menten form to predict the profile of major medium metabolites. The empirical model is used to capture information regarding medium components interactions, including the effect of minor components, to the final hybrid model. Results have shown that better predictions were obtained by the hybrid model in comparison with the original mechanistic model. Reduction of the dynamic autocorrelation error between model and data was also observed by the hybrid model prediction. The model approaches presented in this thesis are shown to be efficient for describing the performance of mammalian cell cultures. A significant part of this work has been developed in collaboration with an industrial partner (MilliporeSigma - A business of Merck KGaA, Darmstadt, Germany) on the development of growth media formulations for mammalian cell cultures in batch and perfusion operations.