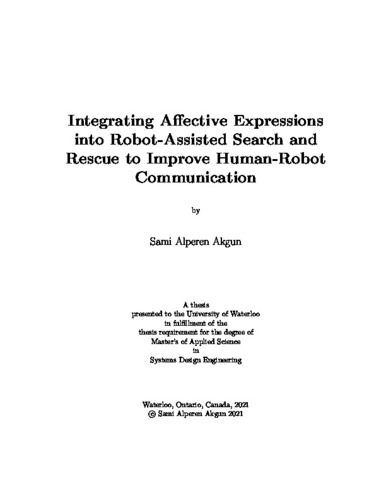 Unexplained or ambiguous behaviours of rescue robots can lead to inefficient collaborations between humans and robots in robot-assisted SAR teams. To date, rescue robots do not have the ability to interact with humans on a social level, which is believed to be an essential ability that can improve the quality of interactions. This thesis research proposes to bring affective robot expressions into the SAR context to provide rescue robots social capabilities. The first experiment presented in Chapter 3 investigates whether there is consensus in mapping emotions to messages/situations in Urban Search and Rescue (USAR) scenarios, where efficiency and effectiveness of interactions are crucial to success. We studied mappings between 10 specific messages, presented in two different communication styles, reflecting common situations that might happen during search and rescue missions and the emotions exhibited by robots in those situations. The data was obtained through a Mechanical Turk study with 78 participants. The findings support the feasibility of using emotions as an additional communication channel to improve multi-modal human-robot interaction for urban search and rescue robots and suggest that these mappings are robust, i.e., are not affected by the robot’s communication style. The second experiment was conducted on Amazon Mechanical Turk as well with 223 participants. We used Affect Control Theory (ACT) as a method for deriving the mappings between situations and emotions (similar to the ones in the first experiment) and as an alternative method to obtaining mappings that can be adjusted for different emotion sets (Chapter 4). The results suggested that there is consistency in the choice of emotions for a robot to show in different situations between the two methods used in the first and second experiment, indicating the feasibility of using emotions as an additional modality in SAR robots. After validating the feasibility of bringing emotions to SAR context based on the findings from the first two experiments, we created affective expressions based on Evaluation, Potency and Activity (EPA) dimensions of ACT with the help of LED lights on a rescue robot called Husky. We evaluated the effect of emotions on rescue workers’ situational awareness through an online Amazon Mechanical Turk Study with 151 participants (Chapter 5). Findings indicated that participants who saw Husky with affective expressions (conveyed through lights) had better perception accuracy of the situation happening in the disaster scene than participants who saw the videos of the Husky robot without any affective lights. In other words, Husky with affective lights improved participants’ situational awareness.