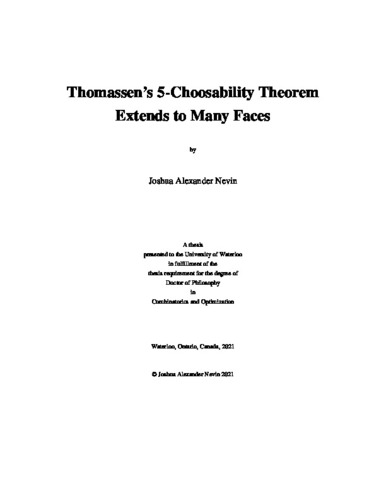 We prove in this thesis that planar graphs can be L-colored, where L is a list-assignment in which every vertex has a 5-list except for a collection of arbitrarily large faces which have 3-lists, as long as those faces are at least a constant distance apart. Such a result is analogous to Thomassen’s 5-choosability proof where arbitrarily many faces, rather than just one face, are permitted to have 3-lists. This result can also be thought of as a stronger form of a conjecture of Albertson which was solved in 2012 and asked whether a planar graph can be 5-list-colored even if it contains distant precolored vertices. Our result has useful applications in proving that drawings with arbitrarily large pairwise far-apart crossing structures are 5-choosable under certain conditions, and we prove one such result at the end of this thesis.