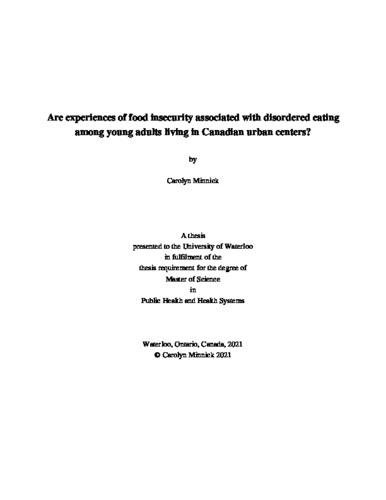 Background: Food insecurity and disordered eating represent two far-reaching and complex public health concerns in Canada, especially among young adults, and are each associated with multiple serious adverse health outcomes. Emerging evidence suggests a potential link between the conditions as both are characterized in part by food restriction and/or binge eating pathology. While it has been posited that food insecurity may increase risk of disordered eating, or risk of an eating disorder, no research on the link between these two conditions has been conducted within the Canadian context. Objectives: The objectives of this study were to 1) characterize the prevalence of household food insecurity, risk of eating disorder and indicators of disordered eating and 2) examine the association between household food security status and risk of eating disorder, as well as indicators of risk (vomiting to lose weight, binge eating and preoccupation with thinness respectively) among young adults living in urban centers in Canada. Methods: Cross-section analyses were conducted using data from the 2016 wave of the Canada Food Study. Multivariable survey logistic regression modelling was conducted to examine the associations between household food insecurity status and disordered eating behaviours, as well as eating disorder risk. Results: Almost half of the participants lived in food-insecure households (41.2%), nearly a third reported at least one episode of binge eating in the previous month (28.9%), over 2 in 10 (22.2%) reported a preoccupation with thinness and one in 20 (5.6%) reported vomiting to control their weight. Over 1 in 10 (12.2%) participants were considered at risk of an eating disorder. Participants from moderately and severely food-insecure households had higher odds of vomiting, binge eating, feeling preoccupied with thinness and being at risk for an eating disorder when compared to food-secure households. Marginally food-insecure households reported greater odds of binge eating compared to food-insecure households. Conclusion: These results suggest that food insecurity and disordered eating/eating disorders have a significant graded association among young adults in Canadian cities, and greater attention should be paid to how proposed interventions and policies address this link.