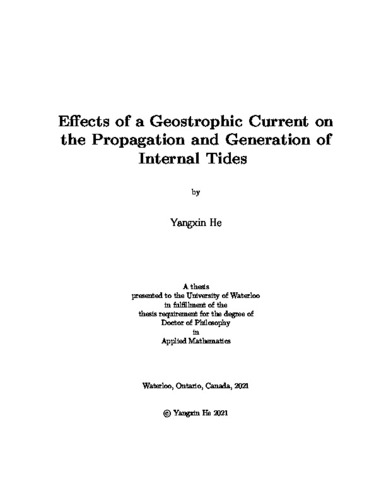 Internal tides (ITs) are ubiquitous in a stratified ocean where they are generated in response to tidal flows incident upon bottom topography. Along-shelf currents or boundary currents are ocean currents commonly observed along coastlines. We investigate the effects of a geostrophic current on the propagation and generation of ITs by performing numerical experiments using the MITgcm. As a mode-one IT propagates perpendicularly across a geostrophic current $V(x,z)$, we have investigated the amount of IT energy reflected from the current and the impact of the current on the transmitted wave field. These are quantified by considering the reflection coefficient $R$ and the linear modal energy conversion $P_n$, where $n$ is the modal number. Here a linear theory built upon idealized barotropic currents is presented. Fully nonlinear numerical simulations are used for the baroclinic currents. We conclude that the reflection is determined by the horizontal shear of the current $V_x$ through varying the effective frequency $f_{eff}$. The modal energy conversion $P_n$ is determined by the vertical shear of the current $V_z$, i.e. the horizontal variation of the density $\rho_x$ as a result of the thermal wind relation. The current can increase $R$ up to approximately 50$\%$. However, $P_n$ is less than 6$\%$ among all our simulations. This indicates that IT can propagate through the current without losing much of its structure and the interaction is mostly linear. The effects of along-shelf barotropic geostrophic currents on IT generation by the K$_1$ tide interacting with a shelf at near-critical latitudes is investigated. We use barotropic currents because it is the simplest way to study the effect of the horizontal shear of the current without complications of a horizontally varying stratification. The horizontal shear of the background current results in a spatially varying effective Coriolis frequency which modifies the slope criticality and potentially creates blocking regions where freely propagating internal tides cannot exist. This thesis is focused on the barotropic to baroclinic energy conversion rate, which is affected by a combination of three factors: slope criticality, size and location of the blocking region where the conversion rate is extremely small and the IT beam patterns. All of these can be significantly altered by the presence of the current. In our parameter space, the current can increase the conversion rate up to 10 times. On the other hand, we have started examining the frequency of the generated internal waves under the influence of the current. Questions have been posed in the thesis and this is part of our ongoing work.

Yangxin He (2021). Effects of a Geostrophic Current on the Propagation and Generation of Internal Tides. UWSpace. http://hdl.handle.net/10012/17312