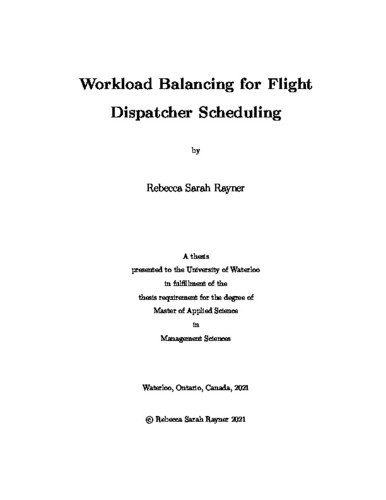 Unlike other airline operations planning problems, optimization in flight dispatching is not common in literature. Flight dispatchers are centrally located and monitor multiple flights in different places simultaneously. Their work involves planning fuel requirements, routing, and weather monitoring, both before and during a flight. An area of opportunity exists in the assignment of work amongst dispatchers. A desk contains a series of flights, and is served by a dispatcher or a series of dispatchers working consecutive shifts. In this work, we do not consider shifts and instead focus on assigning flights amongst a set number of desks. Our goal is to balance the workload of each desk, which is measured by the sum of each desk’s maximum workload throughout the day. Two formulations are presented that model the assignment of flights to desks, which we call the Flight Dispatching Problem. The Flight Dispatcher Schedule Formulation (FDSF) assigns flights amongst a set number of desks. The Set Covering Formulation (SCF) selects from known schedules (the assignment of flights to a single desk) to cover all flights with the specified number of desks (i.e., schedules). The base implementation solves the SCF using a column generation approach that creates new schedules with each iteration. Additional variants are also modelled where we limit which flights are assigned to the same desk. Testing is performed on European Airline Data and American Airlines data. The instances range in size from 46 to 297 flights in one day. We find that the FDSF solves to optimality quickly for small instances but not for the larger ones. The base implementation converges within two hours for the small and mid-size instances. Gaps are reduced using an improvement heuristic in some cases. For the larger instances, neither implementation solves within two hours and the gaps after that time are very large. Constraining the flight assignments provides trade-offs between computation time (which is typically faster) and solution quality (which is typically worse). We also tested the case where load varies throughout the flight. For the base implementation, most of the computation time for larger instances is spent in the pricing problem. In some cases, this is improved by generating multiple columns in each iteration instead of just one. The solution of the pricing problem is an area where future work could be focused to improve the computational performance. Other areas for future work include modelling dispatch zones instead of decomposing the problem by zones, changing the balance metric in the objective, incorporating uncertainty, and including the shift component of the dispatching problem.