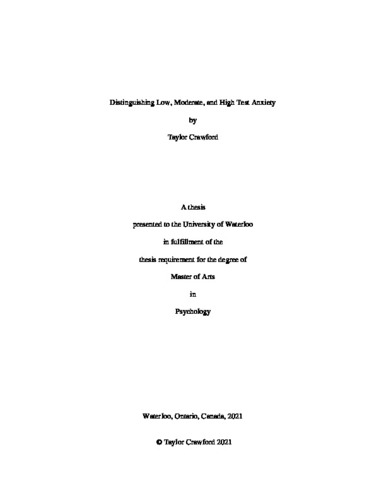 It is very common and understandable for post-secondary students to feel anxious leading up to a test. However, test anxiety can be a serious problem for some students. It is important to identify these individuals, given that test anxiety is associated with a variety of negative outcomes (Hembree, 1988; von der Embse et al., 2018). Although a plethora of self-report measures of test anxiety exist, arbitrary and inconsistent cut-off scores are currently used to make the distinction between those with varying levels of test anxiety (Huntley et al., 2019; Zeidner, 2014). It is evident that we require an empirically supported method of identifying those whose test anxiety is a problem, yet there is almost no research on what differentiates these individuals from those whose test anxiety is not problematic. The goal of the current study is to fill this gap in the literature by gaining a better understanding of the ways in which the experience of test anxiety may differ in those with low, moderate, and high severity levels. Undergraduate student participants were administered a semi-structured interview that inquired about their experiences before, during, and after testing situations. Participants also completed a commonly-used self-report measure of test anxiety (i.e., the Achievement Anxiety Test; Alpert & Haber, 1960). The interviewer separated participants into the severity groups according to an objective rating system based on the distress and interference their test anxiety was reported to cause. The information collected in the interview was then coded and qualitatively analyzed. The findings revealed many similarities in the thoughts, emotions, and bodily reactions individuals across groups experienced. However, some qualitative differences also emerged. Despite this, the questionnaire scores did not appear to distinguish participants in each of these groups from one another, demonstrating the measurement issues within the field. These results therefore have critical implications for the measurement, conceptualization, and treatment of test anxiety.