A Comparative and Exploratory Study of Homogeneous and Inhomogeneous Stratified Turbulence 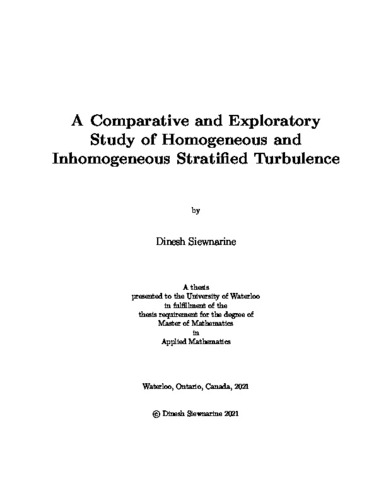 The study of turbulence in the oceans and atmosphere is far-flung and ever-reaching in the academic world with research being done theoretically, experimentally and numerically. With great strides in the increasing power of numerical computation over the years, forced and/or stratified homogeneous turbulence has been studied extensively for multiple simulation setups which give situational results for the inertial range as well as the energy power-law relationships. Some experimental examples are seen in such setups as raking a tank filled with uniformly saline water or the application of some dye to investigate internal wave propagation. On the other hand, numerical simulations often strive to explain certain behaviours by predominantly varying the Reynolds and Froude numbers but a myriad of literature also exists that employs the use of the Richardson and Prandtl numbers as well. One property that homogeneous turbulence does not wholly capture is that of global intermittency. Turbulent regions occur as patches or clouds in nature and there have been few pieces of literature that investigate this inhomogeneity of stratified turbulence and how it behaves when left to freely decay without any forcing. Within this study, a turbulent cloud is numerically set up within an otherwise quiescent cubic domain to represent an inhomogeneous turbulent region. Using a similarly sized cubic domain, the entirety of it is used to model homogeneous turbulence. Then, using direct numerical simulations, a comparison of the non-forced, freely decaying evolution of homogeneous and inhomogeneous turbulence is established where results strive to provide an introductory investigation for the development of a turbulent cloud. This study looks into the evolution of energy, length scales, Froude and buoyancy Reynolds numbers as well as energy spectra within the cloud along with a focus on wave presence and energy of the inhomogeneous system outside of the cloud. It has been found that the shape of the cloud and the initial stratification used in the simulations play a critical role in the evolution of the cloud and large stratification indicates to the presence of highly energetic waves propagating at angles near to the outside edges of the cloud.