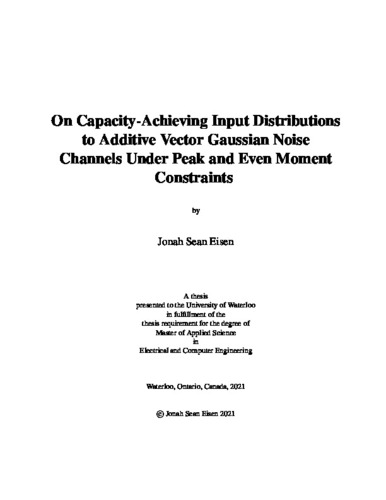 We investigate the support of the capacity-achieving input distribution to a vector-valued Gaussian noise channel. The input is subject to a radial even-moment constraint and, in some cases, is additionally restricted to a given compact subset of R^n. Unlike much of the prior work in this field, the noise components are permitted to have different variances and the compact input alphabet is not necessarily a ball. Therefore, the problem considered here is not limited to being spherically symmetric, which forces the analysis to be done in n dimensions. In contrast to a commonly held belief, we demonstrate that the n-dimensional (real-analytic) Identity Theorem can be used to obtain results in a multivariate setting. In particular, it is determined that when the even-moment constraint is greater than n, or when the input alphabet is compact, the capacity-achieving distribution’s support has Lebesgue measure 0 and is nowhere dense in R^n. An alternate proof of this result is then given by exploiting the geometry of the zero set of a real-analytic function. Furthermore, this latter approach is used to show that the support is composed of a countable union of submanifolds, each with dimension n − 1 or less. In the compact case, the support is a finite union of submanifolds.