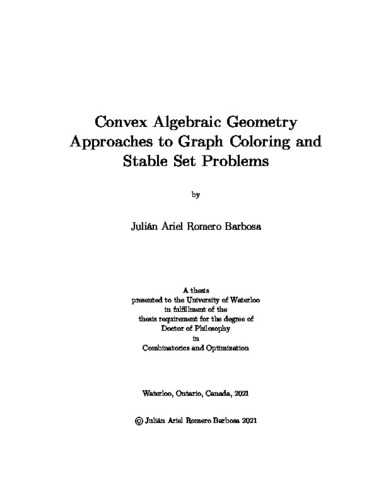 The objective of a combinatorial optimization problem is to find an element that maximizes a given function defined over a large and possibly high-dimensional finite set. It is often the case that the set is so large that solving the problem by inspecting all the elements is intractable. One approach to circumvent this issue is by exploiting the combinatorial structure of the set (and possibly the function) and reformulate the problem into a familiar set-up where known techniques can be used to attack the problem. Some common solution methods for combinatorial optimization problems involve formulations that make use of Systems of Linear Equations, Linear Programs (LPs), Semidefinite Programs (SDPs), and more generally, Conic and Semi-algebraic Programs. Although, generality often implies flexibility and power in the formulations, in practice, an increase in sophistication usually implies a higher running time of the algorithms used to solve the problem. Despite this, for some combinatorial problems, it is hard to rule out the applicability of one formulation over the other. One example of this is the Stable Set Problem. A celebrated result of Lovász's states that it is possible to solve (to arbitrary accuracy) in polynomial time the Stable Set Problem for perfect graphs. This is achieved by showing that the Stable Set Polytope of a perfect graph is the projection of a slice of a Positive Semidefinite Cone of not too large dimension. Thus, the Stable Set Problem can be solved with the use of a reasonably sized SDP. However, it is unknown whether one can solve the same problem using a reasonably sized LP. In fact, even for simple classes of perfect graphs, such as Bipartite Graphs, we do not know the right order of magnitude of the minimum size LP formulation of the problem. Another example is Graph Coloring. In 2008 Jesús De Loera, Jon Lee, Susan Margulies and Peter Malkin proposed a technique to solve several combinatorial problems, including Graph Coloring Problems, using Systems of Linear Equations. These systems are obtained by reformulating the decision version of the combinatorial problem with a system of polynomial equations. By a theorem of Hilbert, known as Hilbert's Nullstellensatz, the infeasibility of this polynomial system can be determined by solving a (usually large) system of linear equations. The size of this system is an exponential function of a parameter $d$ that we call the degree of the Nullstellensatz Certificate. Computational experiments of De Loera et al. showed that the Nullstellensatz method had potential applications for detecting non-$3$-colorability of graphs. Even for known hard instances of graph coloring with up to two thousand vertices and tens of thousands of edges the method was useful. Moreover, all of these graphs had very small Nullstellensatz Certificates. Although, the existence of hard non-$3$-colorable graph examples for the Nullstellensatz approach are known, determining what combinatorial properties makes the Nullstellensatz approach effective (or ineffective) is wide open. The objective of this thesis is to amplify our understanding on the power and limitations of these methods, all of these falling into the umbrella of Convex Algebraic Geometry approaches, for combinatorial problems. We do this by studying the behavior of these approaches for Graph Coloring and Stable Set Problems. First, we study the Nullstellensatz approach for graphs having large girth and chromatic number. We show that that every non-$k$-colorable graph with girth $g$ needs a Nullstellensatz Certificate of degree $\Omega(g)$ to detect its non-$k$-colorability. It is our general belief that the power of the Nullstellensatz method is tied with the interplay between local and global features of the encoding polynomial system. If a graph is locally $k$-colorable, but globally non-$k$-colorable, we suspect that it will be hard for the Nullstellensatz to detect the non-$k$-colorability of the graph. Our results point towards that direction. Finally, we study the Stable Set Problem for $d$-regular Bipartite Graphs having no $C_4$, i.e., having no cycle of length four. In 2017 Manuel Aprile \textit{et al.} showed that the Stable Set Polytope of the incidence graph $G_{d-1}$ of a Finite Projective Plane of order $d-1$ (hence, $d$-regular) does not admit an LP formulation with fewer than $\frac{\ln(d)}{d}|E(G_{d-1})|$ facets. Although, we did not manage to improve this lower bound for general $d$-regular graphs, we show that any $4$-regular bipartite graph $G$ having no $C_4$ does not admit an LP formulation with fewer than $|E(G)|$ facets. In addition, we obtain computational results showing the $|E(G)|$ lower bound also holds for the Finite Projective Plane $G_4$, a $5$-regular graph. It is our belief that Aprile et al. bounds can be improved considerably.