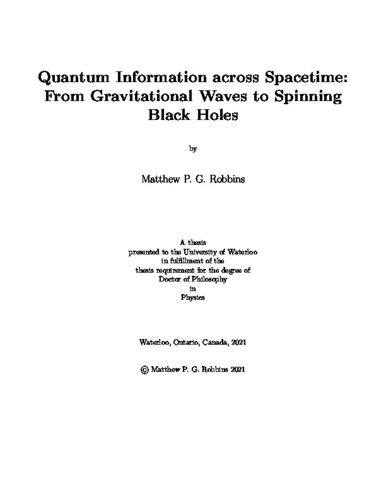 This thesis is split into two parts. In the first part, we investigate Bose-Einstein condensates (BECs) as a means to detect gravitational waves. For the detection of continuous gravitational waves, we study its sensitivity with initially-squeezed phonons by optimizing the properties of the condensate and the measurement duration. We show that this method of detecting gravitational waves in the kilohertz regime is limited by current experimental techniques in squeezing BEC phonons. Without focusing on a specific detector setup, our study shows that substantive future improvements in technology (e.g., increasing the squeezing of BEC states or their physical size) will be necessary for such a detector to be competitive in measuring gravitational waves of astrophysical and/or cosmological origin. We then consider a modulating speed of sound of the BEC trap, whose frequency matches that of an incoming continuous gravitational wave. The trap modulation induces parametric resonance in the BEC, which in turn enhances sensitivity of the BEC to gravitational waves. We find that such a BEC detector could potentially be used to detect gravitational waves across several orders of magnitude in frequency, with the sensitivity depending on the speed of sound, size of the condensate, and frequency of the phonons. We estimate the sensitivity such an experiment would have to gravitational waves and discuss the current technological limitations. We also comment on the potential noise sources as well as what is necessary for such a detector to become feasible. In the second part of this thesis, we turn our attention to Unruh-DeWitt detectors (a two-level quantum system) and rotating Bañados-Teitelboim-Zanelli (BTZ) black holes. In both flat and curved spacetimes, there are weak and strong versions of the anti-Unruh/anti-Hawking effects, relating the detector response, Kubo-Martin-Schwinger (KMS) temperature of the background scalar field, and the temperature given by the Excitation to De-excitation Ratio (EDR) of the detector. We first investigate the effect of rotation on the weak and strong anti-Hawking effects for an Unruh-DeWitt detector orbiting a BTZ black hole in the co-rotating frame. We will show that rotation amplifies the strength of the weak anti-Hawking effect while simultaneously being boundary condition dependent for whether it amplifies or reduces the strength of the strong anti-Hawking effect. There is also a non-monotonic relationship for the strong anti-Hawking effect between the EDR temperature and the angular momentum of the black hole. In addition, we note that the weak anti-Hawking effect is independent of a changing anti-de Sitter (AdS) length, while a longer AdS length increases the temperature range of the strong anti-Hawking effect. We then consider two detectors orbiting a BTZ black hole and show that such correlations – vacuum entanglement – in the environment of near-extremal black holes is significantly amplified (up to 10-fold) relative to their slowly rotating counterparts. We demonstrate this effect by calculating the entanglement between the detectors through the concurrence extracted from the vacuum. The effect is manifest at intermediate distances from the horizon, and is most pronounced for near-extremal small mass black holes. The effect is also robust, holding for all boundary conditions of the field and at large spacelike detector separations. Smaller amplification occurs near the horizon, where we find that the entanglement shadow – a region near the black hole from which entanglement cannot be extracted – is diminished in size as the black hole’s angular momentum increases.