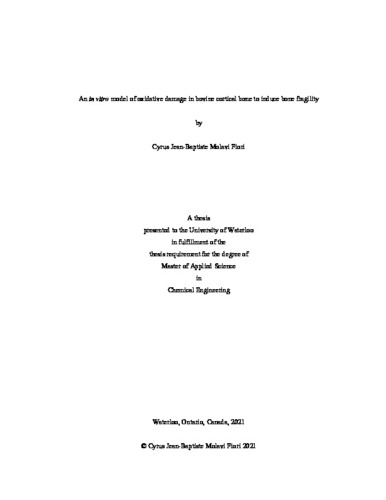 Increased bone fragility can stem from age-related and chronic bone affecting diseases (such as osteoporosis, diabetes and kidney disease), chemotherapeutic and radiation-based cancer treatments, and/or trauma and results in massive annual cost to the healthcare system and decreased quality of life for patients. In order to ameliorate these problems, an in-depth understanding of the cause of increased bone fragility is necessary. Oxidative stress, also known as inflammation, is hypothesized to be a key mechanism of causing oxidative damage in cortical bone’s collagen phase, thereby increasing its fragility; however, this mechanism has not yet been confirmed. Operating under this hypothesis, the present work sought to 1) design an in vitro model of controlled and elevated physiologically-relevant oxidative damage using bovine cortical bone, 2) conduct pore network modelling of the transient reactive diffusion occurring within the bovine cortical bone’s porous structure to inform operation of the in vitro model, and 3) validate the pore network model experimentally using results from the in vitro model. A first-of-its-kind technique was developed to create controlled levels of oxidative damage in bovine cortical bone beams in vitro using free radicals generated from the decomposition of hydrogen peroxide using a Co2+ catalyst in aqueous solution. Pore network modelling (PNM) of this system indicated that the decomposition reaction proceeded extremely fast, which caused the greatest concentrations of hydrogen peroxide to exist at the specimens’ surfaces and limited diffusion of hydrogen peroxide into the bone’s porous network. This was also the first ever application of PNM to study reactive transient diffusion in bone and was valuable for informing the operation of the in vitro model. A novel fluorescent tissue staining technique for carbonyls, differing from current assay-based approaches, was developed to visualize the oxidative damage gradient within the bone beams, and images generated using this technique qualitatively validated the pore network model. No statistically significant differences or correlations were observed between different treatments or hydrogen peroxide concentrations and work to fracture, fracture toughness, maximum deflection, and mean pixel intensity. Statistical significance was not assessed for pixel intensity distributions (n = 1). This work provides important contributions to the study of oxidative stress and bone fragility in the form of a novel application of PNM to bone and new techniques for both causing and characterizing oxidative damage in tissues. These techniques may be applied to other biological materials and human tissues to address the paucity of much-needed foundational knowledge for the study of oxidative stress, damage, and tissue fragility in biological systems.