The Nature and Impact of Active Galactic Nuclei 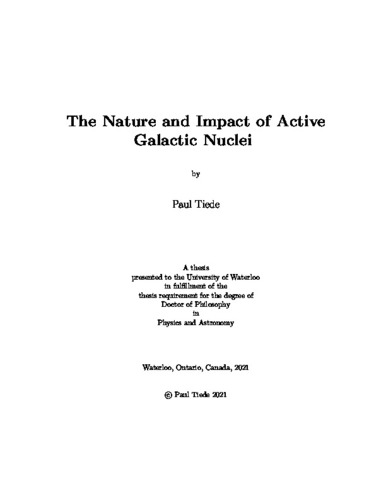 The gravitational interaction around the event horizon of black holes presents theoretical challenges. With the advent of the Event Horizon Telescope (EHT), we are now entering an era in physics where we can probe the structure of spacetime on horizon scales. The EHT presents the first opportunity to directly image the supermassive black holes at the center of the Milky Way and M 87. By imaging the central black hole, we can directly learn about the nature of spacetime and plasma physics on horizon scales. The black hole images produced by the EHT are dominated by a bright ring. The ellipticity of the ring could potentially signal deviations from general relativity. However, whether the EHT imaging techniques can robustly detect ellipticity has not been fully explored. Chapters 2–5 analyze the EHT’s ability to measure ellipticity in four parts. First, in Chapter 2, we develop a method to extract image features (e.g., ring ellipticity) called variational image domain analysis. Second, in Chapter 3, we apply variational image domain analysis to the M 87 image reconstruction pipeline and demonstrate that it is unable to measure ellipticity. The core reason for this failure is that traditional radio imaging techniques cannot quantify image uncertainty. To solve this issue, in Chapters 4 and 5 we use Themis, a Bayesian parameter estimation framework for the EHT, to robustly measure the ellipticity of M 87. To apply Themis to the problem of Bayesian imaging, we developed a new sampler interface in Chapter 4. In Chapter 5 we apply Themis to M 87 and construct the first Bayesian estimates of its ellipticity. Furthermore, we demonstrate that the measured ellipticity is consistent with the expected ellipticity from an accretion disk around a Kerr black hole. In Chapter 6 we describe a novel method to measure spacetime around Sgr A∗ using hot spots. While M 87 is static over an observation, Sgr A∗ is dynamic, changing on minute timescales. Furthermore, Sgr A∗ flares 1–3 times a day in sub-mm, infrared, and X-ray. The Gravity Collaboration recently demonstrated that hot spots near the innermost stable circular orbit explain Sgr A∗ flares. Using Themis, we construct an efficient semi- analytical model of hotspots and fit simulated Sgr A∗ data from the 2017 EHT observations. We demonstrate that the EHT could potentially make a sub-percent spin measurement of Sgr A∗ by tracking the evolution of these flares. Furthermore, by observing multiple flares, we can tomographically map spacetime around Sgr A∗ , providing a test of general relativity in the strong-field regime.