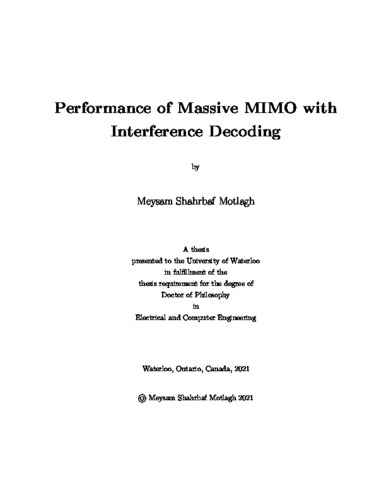 In a massive MIMO system, base stations (BS) utilize a large number of antennas to simultaneously serve several (single or multi-antenna) users at once, where the number of BS antennas is normally assumed to be significantly larger than the number of users. In massive MIMO systems operating in time division duplex (TDD) mode, the channel state information (CSI) is estimated via uplink pilot sequences that are orthogonal in a cell but re-used in other cells. Re-using the pilots, however, contaminates the CSI estimate at BSs by the channel of the users sharing the same pilot in other cells; thus causing pilot contamination which creates coherent interference that, as the number of BS antennas grows, scales at the same rate as the desired signal. Hence, in the asymptotic limits of large antennas, the effects of non-coherent interference terms and noise disappear, except for the pilot contamination interference. A common technique used in the literature to deal with this interference is to treat it as noise (TIN). When using TIN, users' throughput will converge to a constant and thus the benefits of using an ever greater number of BS antennas saturate. However, it is known that the use of TIN in interference networks is only preferred in the weak interference regime, and it is sub-optimal in other regimes (e.g., moderate or strong interference). In this thesis, we show that as the number of BS antennas increases, the pilot contamination interference is no longer weak, and therefore it is beneficial to treat it differently (e.g., decode it jointly with the desired signal) to improve users’ throughput. In the first part of the thesis, we study the performance of interference decoding schemes based on simultaneous unique decoding (SD) and simultaneous non-unique decoding (SND), and show that by doing so the rate saturation effect is eliminated as the number of antennas increases; hence, the per-user rates grow unbounded. We analytically study the performance of two well-known linear combining/precoding methods, namely, MRC/MRT and ZF, for spatially correlated/uncorrelated Rayleigh fading channel models, and obtain closed-form expressions of rate lower bounds for these using a worst-case uncorrelated noise technique for multi-user channels. We compare the performance of the different interference management schemes, TIN/SD/SND, based on the maximum symmetric rate they can offer to the users. Specifically, we first obtain structural results for a symmetric two-cell setting as well as the high SINR regime, that provide insights into the benefits of using interference decoding schemes in different regimes of number of BS antennas. We numerically illustrate the performance of the different schemes and show that with a practical number of antennas, SND strictly outperforms TIN. This gain improves with increasing the number of antennas, and also ZF performs significantly better than MRC/MRT due to better mitigation of multi-user interference. Furthermore, we study the performance of regularized ZF (RZF) via Monte Carlo simulations, and observe that it achieves better rates than ZF for moderately small number of antennas only. Lastly, we numerically investigate the impact of increasing the number of cells, the cell radius, the number of users, the correlation of the channel across antennas and the degree of shadow fading on system performance. In the second part of the thesis, we study the performance of partial interference decoding based on rate splitting (RS) and non-unique decoding. Specifically, we propose to partition each user’s message into two independent layers, and partially decode the pilot contamination interference while treating the remaining part as noise based on a power splitting strategy. In particular, for a two-cell system, we investigate the benefits of an RS scheme based on the celebrated Han-Kobayashi (HK) region, which provides the best known achievable performance for a two-user interference channel (IC). In the case of more than two cells, we propose a generalized RS scheme that non-uniquely decodes each layer of the pilot contamination interference and uses only one power splitting coefficient per IC. In addition, we establish an achievable region for this generalized RS scheme using the non-unique decoding technique. In both cases of two cells and more than two cells and for a practical number of antennas, we numerically study the performance of the proposed RS schemes by numerically optimizing the power splitting coefficients, and show that they achieve significantly higher rates than TIN/SD/SND in all scenarios. Similar to the first part of the thesis, we also numerically examine the impact of increasing the number of cells, the cell radius, the number of users, the correlation of the channel across antennas and the degree of shadow fading on the performance of the RS schemes. Lastly, our simulation results reveal that by replacing the numerically optimized values of the power splitting coefficients with their pre-computed average values (over a large number of realizations), the performance loss is quite negligible, thus reducing the optimization complexity.