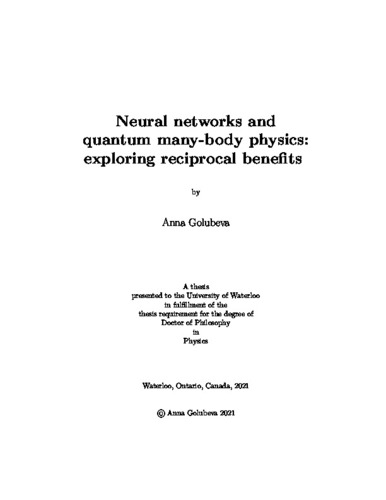 One of the main reasons why the physics of quantum many-body systems is hard lies in the curse of dimensionality: The number of states of such systems increases exponentially with the number of degrees of freedom involved. As a result, computations for realistic systems become intractable, and even numerical methods are limited to comparably small system sizes. Many efforts in modern physics research are therefore concerned with finding efficient representations of quantum states and clever approximations schemes that would allow them to characterize physical systems of interest. Meanwhile, Deep Learning (DL) has solved many non-scientific problems that have been unaccessible to conventional methods for a similar reason. The concept underlying DL is to extract knowledge from data by identifying patterns and regularities. The remarkable success of DL has excited many physicists about the prospect of leveraging its power to solve intractable problems in physics. At the same time, DL turned out to be an interesting complex many-body problem in itself. In contrast to its widespread empirical applications, the theoretical foundation of DL is strongly underdeveloped. In particular, as long as its decision-making process and result interpretability remain opaque, DL can not claim the status of a scientific tool. In this thesis, I explore the interface between DL and quantum many-body physics, and investigate DL both as a tool and as a subject of study. The first project presented here is a theory-based study of a fundamental open question about the role of width and the number of parameters in deep neural networks. In this work, we consider a DL setup for the image recognition task on standard benchmarking datasets. We combine controlled experiments with a theoretical analysis, including analytical calculations for a toy model. The other three works focus on the application of Restricted Boltzmann Machines as generative models for the task of wavefunction reconstruction from measurement data on a quantum many-body system. First, we implement this approach as a software package, making it available as a tool for experimentalists. Following the idea that physics problems can be used to characterize DL tools, we then use our extensive knowledge of this setup to conduct a systematic study of how the RBM complexity scales with the complexity of the physical system. Finally, in a follow-up study we focus on the effects of parameter pruning techniques on the RBM and its scaling behavior.