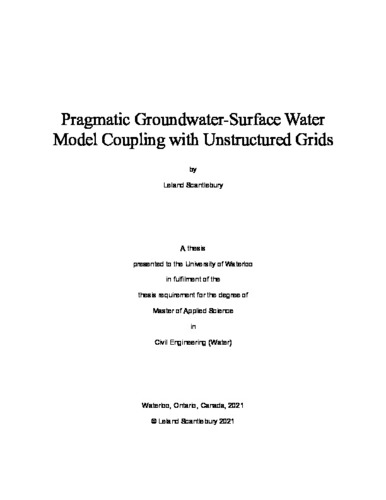 Faced with an array of water issues exacerbated by a rapidly changing climate, hydrologists and hydrogeologists have increasingly found themselves needing to simultaneously model the groundwater and surface water domains together. Historically, for convenience and due to computational limitations, they have been modeled separately, with tools evolving based upon the different needs and questions driving researchers and practitioners in each domain. The tools emerging to solve these new problems range from highly complex, fully coupled, parallelized software solutions requiring enormous computational resources, to comparatively simple combinations of existing models sharing fluxes between the domains. Both groups generally have utilized relatively inflexible representations of the surface-water domain, often with a fixed level of complexity that prevents explorations of model structural uncertainty and process algorithmic skill. In this thesis, a loosely coupled groundwater-surface water modelling framework is presented that allows for adjustable model complexity in both domains. This is accomplished through pairing MODFLOW-USG, a recent version of the industry-standard MODFLOW family of modular groundwater modelling codes that allows for unstructured model grids, with Raven, a state-of-the-art surface water modelling framework supports flexible representations of hydrologic processes, forcing interpolation, and spatial discretization schemes. The resulting software, compiled into a single executable, is aimed at modelling watersheds at the regional scale. Recharge estimated by Raven is directly entered into the MODFLOW-USG flow solution. River-groundwater interactions are handled through a novel sub-grid river package added to MODFLOW-USG, called the polyline boundary junction (PBJ) package. The PBJ method evaluates boundary conditions along individual segment locations within a grid’s dual Delaunay triangulation and geometrically distributes the resultant fluxes to the appropriate Voronoi and/or rectangular cells. Groundwater heads are interpolated along the segment to handle head-dependent flux calculations. The resulting river fluxes are added or subtracted from the Raven river channel water balance, allowing for a closed simulation of the hydrologic cycle. The new coupled Raven framework is demonstrated on the Alder Creek watershed in Southern Ontario and shown to produce physically realistic flows between the surface and subsurface domains.