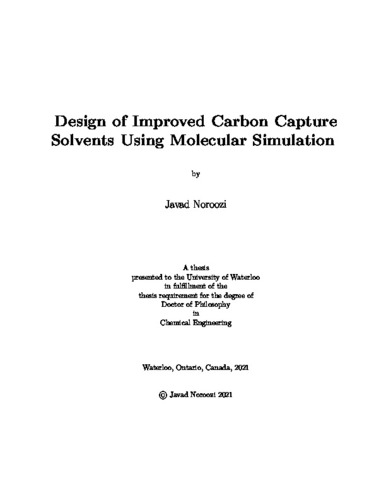 Study of the equilibrium compositions of complex chemically reacting systems by means of experimental measurements and thermodynamic modeling tools is of great interest and importance in chemistry, biology, and chemical engineering. Systems involving ionic species (especially aqueous electrolyte systems) are of particular significance and have long been studied using these approaches, but their modeling by means of molecular-based methodology is in its relative infancy. Carbon capture and storage (CCS) technology using post--combustion CO$_2$ capture (PCC) by reactive absorption with aqueous alkanolamine solvents is currently considered to be one of the most mature technologies to reduce greenhouse gas emissions by CO$_2$ capture from point sources. The discovery of more economically effective solvents is crucial to encourage its future deployment. Such systems usually involve a mixture of electrolyte species coexisting in an aqueous solution, an important aspect of which is their simultaneous chemical and phase equilibrium properties. In this thesis, we develop a general predictive (requiring no experimental data) and computationally efficient molecular-based simulation framework for calculating these properties. The framework is based on an exact translation of molecular simulation methodology to the standard-state quantities of a conventional macroscopic electrolyte solution thermodynamic model. Its most important properties are the reaction equilibrium constants, \textit{p}K, formed by linear combinations of the species standard--state chemical potentials, $\mu_i^{\dagger}(T,P)$. We calculate these quantities by a combination of {\it ab initio} electronic structure calculations using high--level composite methods in the gas phase and alchemical solvation free energy simulations using the General Amber Force Field (GAFF) employing thermodynamic integration in the solution phase. The resulting nonlinear equations of the thermodynamic model are then solved to predict the speciation and the CO$_2$ partial pressure, $P_{\rm CO_2}$ in equilibrium with the solution. We also calculate the temperature dependence of the reaction \textit{p}K values, allowing us to obtain the reaction standard heat values. Furthermore, the methodology also permits the calculation of species with very small solution concentrations, far exceeding the capability of existing experimental methodologies. Overall, we report results for 77 alkanolamines of interest to the PCC process. We initially demonstrate the application of our framework to the reactive absorption of CO$_2$ in aqueous monoethanolamine (MEA) solvent as the well--studied ``benchmark case", the first time that a quantitatively accurate predictive approach requiring no experimental data has been successfully applied to calculate all solution species concentrations and $P_{\rm CO_2}$ for this system. Such systems typically involve small ions such as hydroxide (OH$^-$), hydronium (H$_3$O$^+$), carbonate (CO$_3 ^{-2}$) and bicarbonate ion (HCO$_3^-$) are challenging to model using classical force fields, due to their relatively high electron density. In a separate study, we propose an approach to eliminate the need for simulation of such ions by combining an appropriate choice of the underlying system reactions with well--known experimental data for the binary CO$_2$-H$_2$O system. We apply this approach to 7 primary and secondary amines, including MEA and observe significant improvement in both quantitative and qualitative agreement with experiment of the speciation and $P_{\rm CO_2}$. For amine solvent selection, an important property is its protonation reaction equilibrium constant, often referred to as its acidity, (\textit{p}K$_a$), and its temperature dependence. We assess the accuracy of our framework by focusing on \textit{p}K$_a$ calculations at 298.15K and its integration with a commonly recommended theoretical value of the hydrogen ion (H$^+$) hydration free energy. We find that the GAFF with AM1-BCC atomic charges is able to predict \textit{p}K$_a$ values for a set of 29 amines with absolute average deviation (AAD) of $\approx 0.73$ \textit{p}K$_a$ units, out--performing the commonly used universal solvation model based on solute electron density (SMD). To obviate the need for the (H$^+$) hydration free energy, we develop a classical force field for the hydronium ion (H$_3$O$^+$) based solely on the MEA \textit{p}K$_a$ at 298.15 K. We then use this force field to predict \textit{p}K$_a$ of a large set of 77 amines at 298.15K with an AAD with respect to experimental data identical to that of our previous study. Furthermore, using the derived H$_3$O$^+$ force field, we are able to predict the intrinsic proton hydration free energy as a function of temperature, which has previously only been available at 298.15 K. We also report a temperature--dependent function for the \textit{p}K$_a$ of all 77 amines. Use of the H$_3$O$^+$ force field also allows us to take advantage of the iso--coulombic form of the protonation reaction to obtain improved predictions of the temperature dependence of \textit{p}K$_a$, which further leads to improved its protonation reaction enthalpy ($\Delta H^{prot}$) predictions. We find our prediction of the latter quantify to be in reasonable agreement with available experimental data, and provide evidence that the precision of the results arising from our predictive framework is comparable to or better than that of existing experimental methodologies for obtaining $\Delta H^{prot}$. The reversion of carbamate ion (RNHCO$_2^-$) into bicarbonate ion is another major reaction in primary and secondary aqueous alkanolamine solvents. The equilibrium constant (\textit{p}K$_c$) of this reaction is extremely difficult to measure experimentally, due to the often extremely small species concentrations and the presence of proton exchanging pairs in solution, both of which are challenging for convectional NMR spectroscopic studies. In this thesis, we identify strongly bicarbonate forming amines, and calculate the temperature dependence of \textit{p}K$_c$ and its standard heat of reaction, $\Delta H^{carb}$. While there are significant uncertainties in the experimental \textit{p}K$_c$ values, our predictions are in good agreement with the few available measurements, taking into account the mutual simulation and experimental uncertainties. It is important to note that $\Delta H^{carb}$ for most of the species considered have never been measured experimentally. We conclude the thesis by indicating several important implications of our work, including predictions of the overall heat duty of the PCC process, extensions to solvent blends and other solvents, the ability to perform rapid solvent screening, and the calculation of individual species $\mu_i^{\dagger}(T,P)$ and corresponding $\h_i^{\dagger}(T,P)$ standard--state enthalpy values.