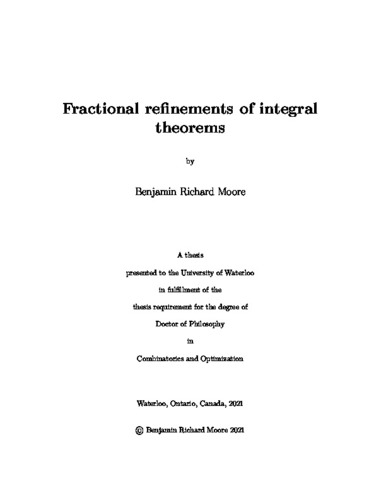 The focus of this thesis is to take theorems which deal with ``integral" objects in graph theory and consider fractional refinements of them to gain additional structure. A classic theorem of Hakimi says that for an integer $k$, a graph has maximum average degree at most $2k$ if and only if the graph decomposes into $k$ pseudoforests. To find a fractional refinement of this theorem, one simply needs to consider the instances where the maximum average degree is fractional. We prove that for any positive integers $k$ and $d$, if $G$ has maximum average degree at most $2k + \frac{2d}{k+d+1}$, then $G$ decomposes into $k+1$ pseudoforests, where one of pseudoforests has every connected component containing at most $d$ edges, and further this pseudoforest is acyclic. The maximum average degree bound is best possible for every choice of $k$ and $d$. Similar to Hakimi's Theorem, a classical theorem of Nash-Williams says that a graph has fractional arborcity at most $k$ if and only if $G$ decomposes into $k$ forests. The Nine Dragon Tree Theorem, proven by Jiang and Yang, provides a fractional refinement of Nash-Williams Theorem. It says, for any positive integers $k$ and $d$, if a graph $G$ has fractional arboricity at most $k + \frac{d}{k+d+1}$, then $G$ decomposes into $k+1$ forests, where one of the forests has maximum degree $d$. We prove a strengthening of the Nine Dragon Tree Theorem in certain cases. Let $k=1$ and $d \in \{3,4\}$. Every graph with fractional arboricity at most $1 + \frac{d}{d+2}$ decomposes into two forests $T$ and $F$ where $F$ has maximum degree $d$, every component of $F$ contains at most one vertex of degree $d$, and if $d= 4$, then every component of $F$ contains at most $8$ edges $e=xy$ such that both $\deg(x) \geq 3$ and $\deg(y) \geq 3$. In fact, when $k = 1$ and $d=3$, we prove that every graph with fractional arboricity $1 + \frac{3}{5}$ decomposes into two forests $T,F$ such that $F$ has maximum degree $3$, every component of $F$ has at most one vertex of degree $3$, further if a component of $F$ has a vertex of degree $3$ then it has at most $14$ edges, and otherwise a component of $F$ has at most $13$ edges. Shifting focus to problems which partition the vertex set, circular colouring provides a way to fractionally refine colouring problems. A classic theorem of Tuza says that every graph with no cycles of length $1 \bmod k$ is $k$-colourable. Generalizing this to circular colouring, we get the following: Let $k$ and $d$ be relatively prime, with $k>2d$, and let $s$ be the element of $\mathbb{Z}_k$ such that $sd \equiv 1\mod k$. Let $xy$ be an edge in a graph $G$. If $G-xy$ is $(k,d)$-circular-colorable and $G$ is not, then $xy$ lies in at least one cycle in $G$ of length congruent to $is \mod k$ for some $i$ in $\{1,\ldots,d\}$. If this does not occur with $i \in\{1,\ldots,d-1\}$, then $xy$ lies in at least two cycles of length $1 \mod k$ and $G-xy$ contains a cycle of length $0 \mod k$. This theorem is best possible with regards to the number of congruence classes when $k = 2d+1$. A classic theorem of Gr\"{o}tzsch says that triangle free planar graphs are $3$-colourable. There are many generalizations of this result, however fitting the theme of fractional refinements, Jaeger conjectured that every planar graph of girth $4k$ admits a homomorphism to $C_{2k+1}$. While we make no progress on this conjecture directly, one way to approach the conjecture is to prove critical graphs have large average degree. On this front, we prove: Every $4$-critical graph which does not have a $(7,2)$-colouring and is not $K_{4}$ or $W_{5}$ satisfies $e(G) \geq \frac{17v(G)}{10}$, and every triangle free $4$-critical graph satisfies $e(G) \geq \frac{5v(G)+2}{3}$. In the case of the second theorem, a result of Davies shows there exists infinitely many triangle free $4$-critical graphs satisfying $e(G) = \frac{5v(G) +4}{3}$, and hence the second theorem is close to being tight. It also generalizes results of Thomas and Walls, and also Thomassen, that girth $5$ graphs embeddable on the torus, projective plane, or Klein bottle are $3$-colourable. Lastly, a theorem of Cereceda, Johnson, and van den Heuvel, says that given a $2$-connected bipartite planar graph $G$ with no separating four-cycles and a $3$-colouring $f$, then one can obtain all $3$-colourings from $f$ by changing one vertices' colour at a time if and only if $G$ has at most one face of size $6$. We give the natural generalization of this to circular colourings when $\frac{p}{q} < 4$.