The development of integrating number and proportion in probabilistic decision-making 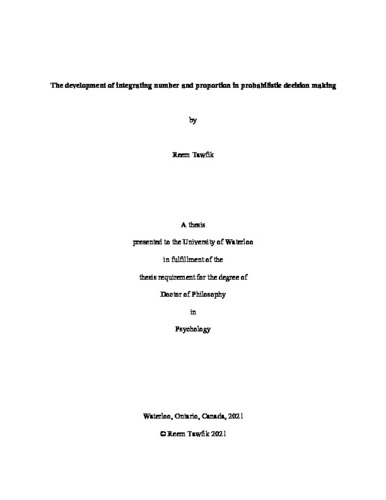 The ability to integrate multiple pieces of information and use it to guide decision-making is an essential part of everyday reasoning. While it may not seem like it, the information in our environments is often numerical in nature. From simple decisions like which cashier line to stand in at the grocery store, to more consequential judgments like evaluating the chances of getting accepted into a competitive graduate program, numbers and proportions are everywhere. And while combining numerical information to make judgments and decisions sounds challenging, even young children have some of the requisite abilities to do so. In this dissertation, I describe and discuss a series of experiments that examine the developmental trajectories of integrating numerical and proportional information to make probability judgements and arrive at favourable outcomes in game-like scenarios. Chapter 2 examines whether 5- and 6-year-old children (N=160) and adults (N=68) can integrate two types of numerical information to make decisions in a probability game involving single- and multi-draw samples from different distributions. I presented children with a computer game in which they must maximize the number of green objects obtained. In order to do so successfully they were required to integrate the absolute number of draws with the proportion of targets to non-targets from which those draws are made. Across five studies, I established that 5- and 6-year-olds and adults can – under certain conditions –integrate two sources of numerical information to make decisions that maximize the odds of a favourable outcome. Chapter 3 examines the developmental origins of these integrative abilities by adapting the paradigm used in Chapter 2 to test infants (n=46). I presented them with two trial types: one where the correct response was to choose the lower draw number from the distribution with a higher proportion of target objects, and another where the correct response was to choose the higher draw number from the distribution with a lower proportion of target objects. Results from 10-12-month-olds revealed that infants were not able to combine the numerical and proportional information to make probability judgments and performed at chance levels with no effects of age or trial type. These results suggested that the ability to integrate both numerical and proportional information to make probability judgments is not yet a consistent hallmark of probabilistic reasoning within the age range we tested. Chapter 4 examines whether or not toddlers (n=40) would be successful on the same trial types used with infants. Results from 18-30-month-olds show that toddlers were able to correctly choose the larger draw number from the distribution with the lower proportion of target objects, but responded at rates no different than chance on the trial where the correct response was to choose the smaller draw number from the distribution with the larger proportion of target objects. Taken together, the results from these three sets of experiments suggest that adults and school-aged children are capable of integrating probability and number in a game-like probability task, and that these abilities may begin in toddlerhood. It appears that beginning in the second year of life, but likely not before then, human learners can consider both the distributions and the number of draws when reasoning about sampling and probability.