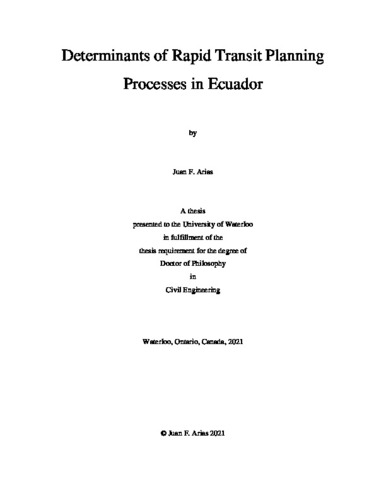 This research presents a novel framework for the quantitative and qualitative analysis of rapid transit planning processes based on a mixed-method approach, along with the corresponding results: the relative importance of factors that affect the projects, a ranking of the critical barriers that hinder their implementations, and the implications of private participation. The planning and implementation of rapid transit in Ecuador has proven to be a daunting endeavor. Nineteen projects have been planned, but only nine have reached implementation. This research seeks to understands how these projects’ design and implementation processes were shaped. The analysis of the design process focuses on how different factors (demand, local conditions, financial, social and political) have influenced all of the rapid transit projects in Ecuador over the past three decades by evaluating their relative significance on each system component (alignment, size, and technology). This analysis uses a multiple-case methodology including in-depth interviews with the senior members of the technical teams, as well as a survey component based on the Analytic Hierarchy Process (AHP) for quantification of the relative significance of the factors. The analysis shows five key results: 1) Each project was unique and external factors introduced a varying degree of complexity into each planning process; 2) The systems’ alignments and sizes were mostly driven by demand and local conditions (i.e., a rational planning process); 3) The main factor driving technology selection has evolved over time from system demand to political (i.e., a political bargaining approach); 4) Negative economic conditions had a large influence on the factors of all project components; and 5) There is a lack of rational alternative evaluation and an absence of corresponding tools/guidelines in Ecuador. Nonetheless, several processes included practices that contributed to a more rational planning process: lifecycle cost analysis for the various technology alternatives, explicit decision-maker guidelines, transferring the demand risk to the private sector, and the use of Multicriteria Decision Analysis (MCDA). In terms of project implementation, this research evaluates the critical barriers for project implementation along with corresponding mitigation measures. A mixed-method, based on an existing theoretical framework and Best-Worst Scaling (BWS), is proposed and applied. The analysis is grounded by in-depth interviews and surveys conducted with the technical teams of the planned projects. Results show the top tier of the critical barriers is composed of 1) Lack of political leadership, commitment or continuity; 2) Underestimation of implementation complexities; 3) Political frictions; and 4) Rushed planning processes. Seven key mitigation measures were identified and linked to each barrier: 1) Connect the social, political and technical perspectives; 2) Aim at starting construction before the end of political cycles; 3) Increase the private role in the procurement strategy; 4) Increase community input during planning; 5) Generate public opinion monitoring; 6) Adapt projects features to community input (when applicable); and 7) Focus on the implementation of one trunkline at a time. Moreover, evidence suggests critical barriers are not technology specific, but rather endemic to the planning process and that the projects’ critical political dependence promoted planning based on political cycles in detriment of long-term efforts. These findings align with previous results from developing cities, confirming the transferability of results at an aggregate level, but also show that the barriers and corresponding mitigation measures can be context specific. In both, the design and implementation stages, the private participation led to different outcomes. The two largest cities in Ecuador each implemented three BRT corridors (1995 to 2013). The projects present similar characteristics, and thus a unique opportunity to analyze how private participation influenced their performance. The analysis identifies the level of private participation and to what extent it influenced the outcomes of the projects. Two approaches were identified: 1) Including incumbent operators by delegating vehicle acquisitions and operations; and 2) Replacing them with a public company. Financial strength and interest of the incumbent operators to continue functioning along parallel routes were major issues. Quito was successful in the implementation of the first corridor through public delivery, but failed its attempts with private participation. Guayaquil surmounted the barriers for effective private participation through a Special Purpose Vehicle (SPV) that managed the risk due to the inherent nature of the consortiums. This research provides the first comprehensive analysis of the design and implementation processes in Ecuador. It is expected that the results will contribute to more efficient and sustainable investments in the future.