Vadose zone flow patterns and their implications for sodium transport and aquifer recharge in a reclaimed fen watershed in the Athabasca Oil Sands Region, Alberta, Canada 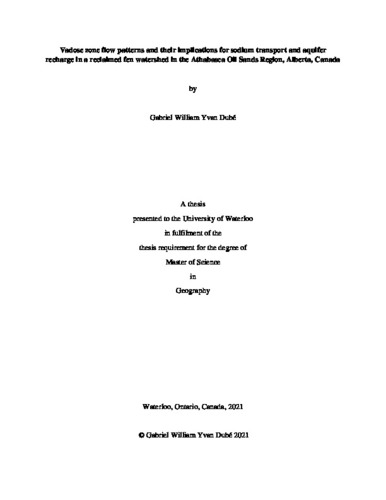 The reclaimed Nikanotee Fen watershed consists of an upland tailings sand aquifer, capped with a finer soil cover (LFH-mineral mix, or LFH) to support vegetation, that supplies groundwater to a low-lying fen peatland. Maintaining high water levels in the fen is crucial to the success of the reclamation project. To this end, furrows were tilled in the LFH to retain overland flow and increase aquifer recharge. LFH was also completely scoured in certain areas to allow direct infiltration into bare tailings sand “basins”. Elevated concentrations of leachable Na+ in unsaturated tailings sand is a long-term source of Na+ into the groundwater, which poses a risk to the health of downstream fen vegetation and constitutes an additional challenge to peatland reclamation. The rate of Na+ flushing from sand is dependent on wetting patterns of percolating water in the unsaturated zone, which is itself affected by microtopography (e.g., furrows) and preferential flow. In particular, preferential finger flow has been hypothesized to occur in tailings sand, but to date, percolation patterns in the reclaimed upland have not been studied in detail. The purpose of this study was to characterize unsaturated flow patterns under the influence of microtopography and investigate their impacts on groundwater recharge and Na+ flushing. A dye tracer study showed that large amounts of dye runoff collected and infiltrated in furrows. Finger-like flow was observed in sand, having a maximum width of 20.7 cm and a maximum depth of 65.9 cm below LFH under one furrow. Similar wetting patterns were observed in a dye test within a bare tailings sand basin. Combined with macropore flow, finger-like flow was shown to promote deep penetration and limited lateral spreading of dye, indicating that furrows are responsible for a large proportion of recharge and Na+ flushing. Despite this, split spoon samples collected at several locations between 2013 and 2019 suggest that Na+ concentrations in unsaturated tailings sand decreased by ~90% across the entire upland, including under a sampled ridge. Large wetting events and lateral spreading of water from sand under furrows into sand under ridges are believed to be responsible for the site-wide decrease of Na+ concentrations in sand. Flow tank experiments using repacked soils also showed that furrows collected large amounts of runoff (>22%) and were responsible for the majority of flow in sand under moderate rainfall, although finger-like flow could not be reproduced under lab conditions. Under heavy rainfall, the LFH moisture content increased sufficiently to transmit water across the entire LFH-sand interface. Modelling predicted that, when the fraction of runoff from ridges into furrows was low (<25%), furrows spaced 83 cm (as-built design) would provide less recharge than a flat surface under 0% runoff. However, this was deemed to be an underestimate of furrow recharge contributions, as runoff losses (for a runoff fraction >0%) in the flat case would reduce recharge. Increasing furrow spacing to 150 cm improved recharge compared to the 83 cm case, but had a higher risk of flooding and should be accompanied by larger landforms such as recharge basins. Furrows are expected to be most important for recharge soon after reclamation, when runoff and LFH water retention are highest. They are particularly important for capturing runoff during high-volume wetting events, such as a large rainfall event or snowmelt. As weathering of the LFH progresses, more water would be able to enter the sand under ridges, thus decreasing the relative recharge improvements from furrows. Sedimentation and concentrated root water uptake from preferential establishment of vegetation in later years may also decrease the recharge contributions of furrows.