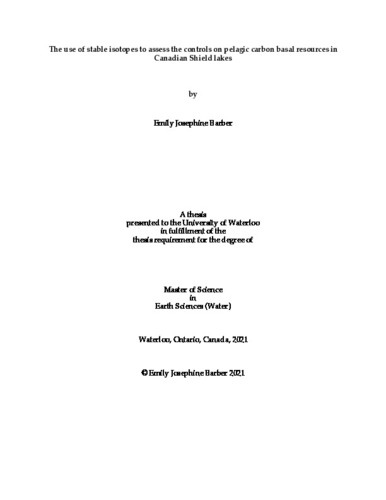 Freshwater lakes are often natural sources of greenhouse gases (GHGs) such as carbon dioxide (CO₂) and methane (CH₄) to the atmosphere, and therefore it is important to examine carbon and nutrient cycling in these complex ecosystems. Stable isotopes of carbon, nitrogen, and hydrogen are incredibly useful tools for providing information on lake processes. The overarching objective of this thesis is to use stable isotopes to examine how carbon, in its many forms, is partitioned between the atmosphere, sediments, and the pelagic zone of small, oligotrophic, Canadian Shield lakes. Lakes receive large external, terrestrial inputs of organic matter (OM). These OM inputs alter and change the physical and chemical parameters of lakes and exist in both the dissolved (DOC) and particulate (POM) forms. In order to examine the ways in which OM inputs can affect lake ecosystems, I took monthly samples during the ice-free season of a suite of stable isotope and biogeochemical parameters in a series of nine lakes along DOC gradient. The DOC gradient represents varying inputs of terrestrial OM. There is seasonality in terms of DIC concentrations, pCO₂ values, and δ¹³C-DIC values, across the DOC gradient. Across the suite of lakes, higher DOC concentrations show more negative δ¹³C-DIC values. This may indicate that in lakes with higher inputs of terrestrial OM that these inputs exert control over the values of δ¹³C-DIC and δ¹³C-CO₂, and therefore lake POM and surficial sediments. Terrestrial OM can also control the relationships between DOC, DIC, POM, and lake sediments. I examined the terrestrial contamination of POM using two different methods. I first corrected for the terrestrial fraction of POM using C:N ratios and estimated δ¹³C and δ¹5N values for phytoplankton. Bulk, uncorrected δ¹³C and δ¹5N-POM values are more positive than values corrected using this method. I also physically size separated POM. For each method, two different terrestrial end members were used- DOC and terrestrial vegetation. No significant differences were found between size fractions. However, in terms of C:N ratios, the C:N ratio of the 10 <x< 20 μm fraction was significantly higher (one-way ANOVA, p= 1.62 x 10-5, F= 13.99) than the other size fractions, perhaps due to a higher number of terrestrial particles falling into the size range. There can be confounding issues when using δ¹³C values to parse allochthonous and autochthonous sources in lake ecosystems due to seasonal changes in pH, DIC concentration, shifts in phytoplankton species composition, and the carbon species used in photosynthesis (CO₂, HCO₃-). It can be advantageous to use additional isotopes, such as stable hydrogen isotopes (δ²H). I measured δ²H-DOM values in a subset of six lakes and four headwater boreal streams. DOM in both streams and lakes does not reflect the autochthonous OM but is also substantially modified from terrestrial vegetation. Therefore, there are ultimately issues with this approach as neither terrestrial endmember is accurately represented by δ²H-DOM values. I also used stable carbon and hydrogen isotopes to examine dissolved CH₄ in boreal lakes. Most lake studies measure δ¹³C-CH₄ alone, and in those that do measure δ²H-CH₄, the values are much different from the small, soft water, oligotrophic lakes studied in this thesis. I took samples of δ¹³C-CH₄ and δ²H-CH₄ throughout the water column in fourteen different lakes. These values show that lake CH₄ above the thermocline does not originate from the atmosphere. The sampled CH₄ does not clearly fall into the suggested diagnostic ranges for either methanogenesis pathway, and is isotopically different from literature values. The range in hypolimnion CH₄ isotopic values was found to be much more constrained compared to epilimnion values, particularly in terms of δ²H-CH₄ values. Therefore, there is a need for further research on other CH₄ processes, such as anaerobic CH₄ oxidation. The data presented in this thesis demonstrates the complex nature of the lake carbon cycle. There is a need to better define terrestrial endmembers, and current methods may not be sufficient to determine allochthonous and autochthonous OM inputs. Further, isotopic values of CH₄ illustrate the need for further investigation of lake CH₄ dynamics.

Emily Josephine Barber (2021). The use of stable isotopes to assess the controls on pelagic carbon basal resources in Canadian Shield lakes. UWSpace. http://hdl.handle.net/10012/17079