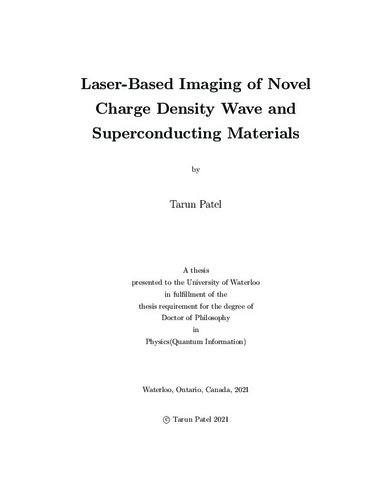 The following thesis presents experimental study of two crystalline materials which show correlated electron phases. The first material 1T-TaS2 is a two-dimensional van-der-Waals material. This family of materials have been of intense research interest since the discovery of mechanical exfoliation technique, which allows for fabrication of atomically thin flakes of high crystal quality. Subsequent development in dry-transfer techniques have created the capacity to vertically stack these flakes to get desired heterostructures. Bulk crystals of 1T-TaS2 had been previously studied and were known to undergo multiple charge density waves (CDW) transitions as a function of temperature. In ultra-thin flakes of 1T-TaS2 the temperature hysteresis of Nearly-Commensurate (NC) to Commensurate (C) phase transition has been shown to widen and host states of intermediate resistivity. While such measurements provide global information, a spatially resolved study would answer the question of distribution of the NC-C phases in these states. Such a study would help to identify further differences between these intermediate states and also answer questions relevant for device miniaturization.In order to achieve this, we propose a vertical heterostructure geometry of the following order h-BN/1T-TaS2/WSe2/Gr. This geometry utilizes the high photocurrent extraction efficiency of such devices to map the phase of 1T-TaS2 in the overlap region. A scanning laser microscopy system is used to map the photocurrent response of these devices with diffraction limited resolution. We compare the spatial maps obtained for such devices with relatively thick and thin 1T-TaS2 flakes as they undergo the NC-C phase transitions. Further motivation to study this material is for its potential use in electronic devices. Various methods have been shown to alter the phase of the material over a wide temperature range. Applied electric _eld has been previously shown to control the CDW state of the ultra-thin flakes by driving the material from the NC to C or C to NC state in a unidirectional manner. We are able to reproduce this control and additionally able to achieve bi-directional driving at a constant temperature. Spatial photocurrent maps of such control provide additional information which is modeled phenomenologically by a free energy analysis. The second class of materials we study are high pressure Hydrides which are known to have the highest superconducting TC. Metallic hydrogen was first proposed to be a room temperature superconductor by Ashcroft in 1968, but the high pressure requirement to fabricate such material still remains beyond practical limit. Alternatively it was suggested that hydrogen dense compounds could harbor high-temperature superconductivity at more achievable pressures . H3S and LaH10 are two such materials that show superconductivity at 203K and 250K respectively. While it is possible to measure electrical resistivity of these samples, it is difficult to measure other properties of superconductivity like the Meissner effect as the samples are held at high pressures under diamond anvils. Optical measurements that consider the presence of diamond in the beam path over the possibility of exploring the nature of superconductivity in these exotic samples. Previous measurements exploring the reflectivity of H3S superconducting samples in the near-infrared regime show a dip in the 400-650meV energy range. This matches with theoretical predictions that assign this depression of reflectance to strong scattering from bosonic excitations. We aim to use this result to spatially map the superconductivity in these samples using our laser scanning setup with laser wavelength of 2300nm. In this thesis we report the initial data taken on a H3S sample.