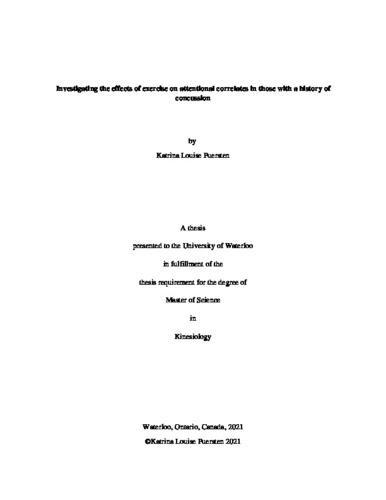 The current understanding of changes that occur neurophysiologically and neurocognitively in the brain following concussion are considerably debated among researchers. Even more largely debated are the long-lasting changes to brain structure and function as a result of neuronal damage. Recently there has been a paradigm shift that includes analyzing these physical changes in the brain and their implications on long-term health. Recently, studies have begun to look at long-term changes and their implications in the exacerbation of accelerated cognitive aging. Findings show that early in the aging process, those who have previously sustained concussions have brain wave patterns that match those of older adults, including those with Alzheimer’s. It was hypothesized that those who had previously sustained a concussion, following a bout of moderate intensity exercise, would have increases in both the P3 and N2 amplitudes compared to non-concussed counterparts. Eight participants were collected and assigned to a concussion (C) or non-concussion (NC) group based on their concussion history. Participants were asked to complete a novelty oddball paradigm during which targets, non-targets, and novel stimuli (images) were shown in randomized blocks. Participants were required to respond to targets, ignore non-targets, and remember the number of images and what the images were. Following this task, participants exercised for 20 minutes at 70% of heart rate max and rested for 10 minutes post-exercise before participants completed the same task, this time with different novel stimuli (targets and non-targets remained the same). P3 and N2 amplitudes and latencies were measured using electroencephalography to investigate the neural correlates related to attention. To assess behavioural changes, response time and accuracy were collected during stimulus presentation. ERSP data was also collected to explore oscillation patterns in the concussed brain before and after exercise. Due to factors related to COVID-19, supplementary data sets were used to explain pre-exercise P3 and N2 amplitudes, as well as, ERSPs. Results show that participants who had previously sustained a concussion exhibited larger amplitudes in the P3 and N2 waveforms pre-exercise, as opposed to their NC counterparts. Following exercise however, while the NC group increased in amplitude as expected, the C group decreased in amplitude in such a way that matched levels similar to control data, a finding inconsistent with previous studies done with concussion and exercise. Coincidentally, ERSPs showed decreases in synchrony in theta, alpha, and beta bands following exercise in the NC group, while the C group exhibited the opposite: increases in synchrony following exercise. Our results suggest that there are long-standing structural and functional changes to the brain following concussion and depending on the individual history of each event, can inflict differential results on the neural markers of attention. Additionally, there may be a relationship between long-term exercise and adaptations to concussion wave patterns in attention that could aid in the slowing of accelerated aging in the brain following concussion. These results inform brain wave patterns in concussion following exercise and future studies in aging populations who have previously sustained a concussion.

Katrina Puersten (2021). Investigating the effects of exercise on attentional correlates in those with a history of concussion. UWSpace. http://hdl.handle.net/10012/17075