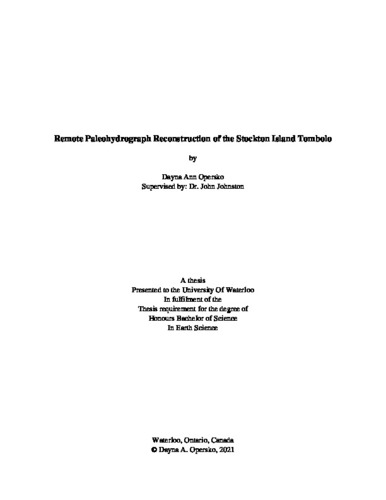 Rising lake levels have become a concern for the coasts of Lake Superior and one such coastline is the Stockton Island Tombolo (SIT) that protects the Pine Barrens Habitat (PBH) in the Apostle Islands National Lakeshore (AINL), Wisconsin, United States of America. If the SIT is lost, the threatened and endangered species that live within the PBH will disappear. For the AINL managers to make an informed decision on how to protect this unique and sensitive area, they need to understand how lake level and coastal sediments will change. Lake level trends and patterns for Lake Superior have been reconstructed from ancient, preserved shorelines, creating paleohydrographs that help to understand how lake level has changed in the past by comparing age and elevation (Johnston et al., 2012). Though fieldwork has been postponed due to COVID-19, there is an opportunity here to develop ideas mentioned in Johnston et al. (2012) and Heather (2021) using topographic elevations and a correction factor to reconstruct a paleohydrograph from the ancient shorelines at AINL. Elevations were retrieved from light detection and ranging (LIDAR) data, afterwards a Digital Elevation Model (DEM) was created. The DEM was divided into the East and West strandplains and one transect from each was chosen then the two were combined to represent one SIT pattern. Then elevations were adjusted to estimate the base of the foreshore contact, normally obtained from coring shorelines to interpret past lake level elevations. Trends and patterns in the representative paleohydrograph are then compared to paleohydrographs from Johnston et al. (2012) to determine approximate ages for the ridges in the SIT. The more landward ridges, are determined to be from the Nipissing phase while the lakeward ridges, are from the Sub-Sault phase. This new remote paleohydrograph reconstruction for SIT helps to preliminarily interpret strandplain sequences on the SIT and will potentially help guide future fieldwork and better understand the context for managing the SIT and PBH in AINL.