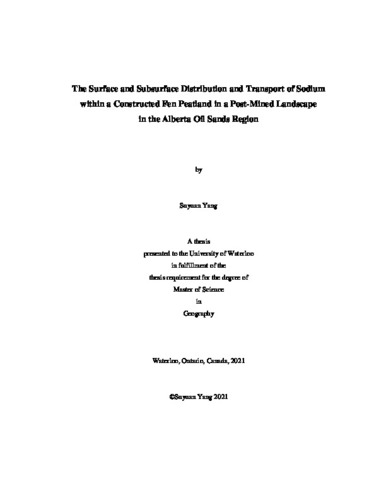 Nikanotee Fen Watershed is an engineered upland-fen peatland system in the Athabasca Oil Sands Region constructed from salvaged peat and forest soils, overburden and tailings sand materials. Sodium-rich leachate from tailings sand has been shown to migrate to the fen system through groundwater, as expected, where it impacts fen vegetation health. The goal of this research is to quantify the spatial distribution of EC (electrical conductivity) and sodium (Na+) in ponded surface water and in the shallow subsurface zone (top 35 cm) of the fen peat deposit. Water samples collected from the ponded surface water and subsurface zone (10 and 30 cm below ground surface (bgs), with 5 and 10 cm intake, respectively) of the fen in 2019 showed that seasonal average Na+ concentration and EC were ~290 mg L-1 and ~2800 µS cm-1, respectively. The highest Na+ concentration and EC were generally found in the wettest part of the fen (southwest corner; average water table 16 cm above ground surface (ags)), and the lowest were found in the relatively dry (average water table 1.5 cm bgs) north-east corner near the drainage outlet of the fen. Na+ concentration and EC in ponded surface water were more responsive to precipitation dilution and evapotranspiration concentration, whereas in the subsurface zone, they were steadier, but generally increased from May to August. The change in Na+ mass measured between June 3rd and August 13th in ponded surface water and in the shallow subsurface (0-35 cm) of the fen (-66 kg) was smaller than that estimated from the sum of hydrologically driven fluxes (groundwater inflow and fen discharge; atmospheric fluxes were negligible), which was -179 kg (i.e., a net loss over this period). The 2019 season (May to August) was relatively wet and cool, with 264 mm precipitation input, 272 mm actual evapotranspiration output, 61 mm fen runoff output, 26 mm groundwater inflow, with average air temperature of 14 °C. The water budget showed a net loss, but storage change showed an increase, which could be the uncertainty that arises with groundwater underestimation. The precipitation-driven discharge controlled the mass efflux of Na+ from the system at an estimated seasonal average rate of 4 kg day-1 (total of 261 kg from June to August) with an average Na+ concentration of 229 ± 148 mg L-1. At the rate of Na+ discharge observed in 2019, the residence time of the original Na+ mass in the fen and upland system (27 tonnes) was estimated to be 36 frost-free seasons (183 days per year) post-construction under similar wet and cool weather conditions. Given the relatively small proportion of salt being flushed annually, elevated levels of salinity will likely be sustained for several decades. Na+ has reached the rooting zone, so salt-tolerant vegetation is an important attribute that should be targeted for newly constructed systems. Monitoring Na+ concentration and EC in discharge more frequently and for a longer period is recommended to refine the flushing timeframe prediction.

Suyuan Yang (2021). The Surface and Subsurface Distribution and Transport of Sodium within a Constructed Fen Peatland in a Post-mined Landscape in the Alberta Oil Sands Region. UWSpace. http://hdl.handle.net/10012/17032