Handle with Care: Agreeableness and Responses to Hurt Feelings 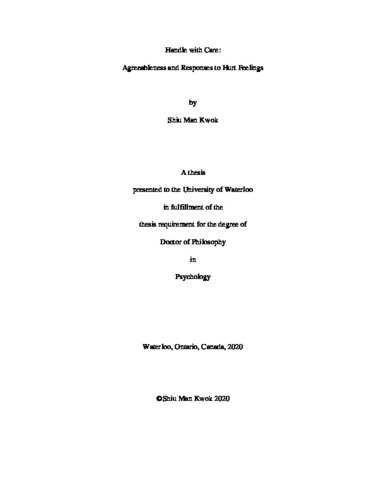 What factors predict people’s reactions to hurt feelings in romantic relationships? I propose that people higher in agreeableness (Agreeables) show more cognitive and behavioral responses to hurt feelings that reflect constructive intentions than do people lower in agreeableness (Disagreeables). I further propose that three features of agreeableness, namely trust, communal motivation, and self-regulation, help explain why Agreeables respond with more constructive intentions than do Disagreeables. Studies 1-3 showed that compared to Disagreeables, Agreeables reported (a) higher forgiveness, (b) lower perceptions that the partner was intentionally hurtful, (c) more use of positive-direct responses, and (d) less use of negative-direct responses in a past hurtful incident. Study 4 replicated the findings regarding positive-direct and negative-direct responses using partner’s report. I experimentally manipulated cognitive load in Study 5, and found that agreeableness was positively associated with responses that reflect constructive intentions only among participants who were under high (vs. low) cognitive load. Also, results suggest that trust and communal motivation helped explain the associations between higher agreeableness and (a) higher forgiveness, (b) lower perceptions of a partner’s hurtful intentions, and (c) more use of positive-direct responses. However, self-regulation helped explain only the link between higher agreeableness and less use of negative-direct responses. Finally, Study 6, which involved dyadic, behavioral, and longitudinal data collected by Pietromonaco and colleagues, showed that Agreeables sought care from their partner in conflicts more positively and directly than did Disagreeables. This research sheds light on the factors that predict seemingly constructive reactions to hurt feelings, and illustrates the cognitive and behavioral manifestations of trait agreeableness in romantic relationships.