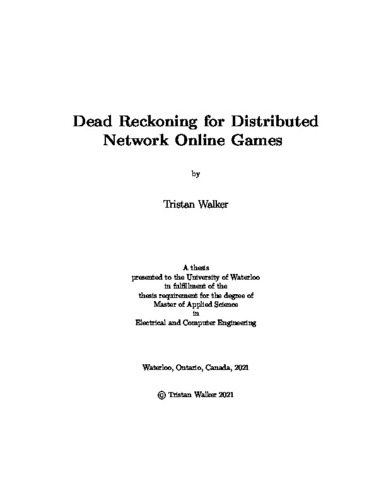 Online networked games are becoming increasingly popular. One type of network architecture used in these games is a distributed network architecture, where players send periodic updates to each other and each player must locally reconstruct the position of their opponents in between these updates. In this work, we assume a car model for the players, as errors in this type of network are most pronounced when players have high speeds. We are interested in decreasing this update frequency in order to conserve bandwidth. We are also interested in investigating issues that arise when these locally replicated opponents need to interact and collide with objects in the environment. In this thesis we decompose the replication problem into two components: first, we must predict the position of our opponents by extrapolating from the received updates, then we must create a smooth trajectory from these predicted positions that appears believable to the player. We introduce a neural network based approach to solving the prediction portion that outperforms the current state of the art. We then propose a neural network based approach and an approach based on a path tracking controller for mobile robots to generate smooth trajectories. We present results to compare these approaches and show that the path tracking approach performs better than both the neural network approach and the established state of the art approaches. We also investigate collisions between replicated opponents and the environment. This is a complex problem, so for simplicity we are only examining collisions with static obstacles. Collisions can vary dramatically based on small changes in impact point and angle, and so we want to be able to predict collisions based on the predicted position of the opponent because that is theoretically our best estimate of the true position of our opponent. We propose a neural network based approach to this problem, which is able to predict the collision response of a vehicle colliding with a static obstacle. We present results that show this method has potential to outperform the current best practice, but we also discuss several implementation issues that must be addressed.