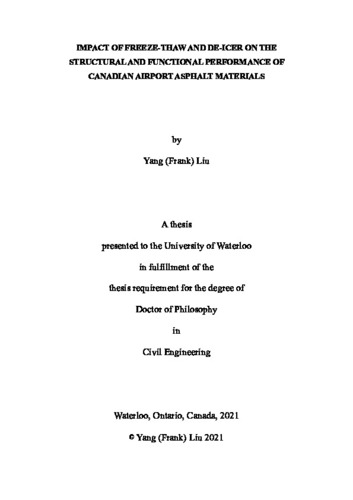 Asphalt pavement is widely used on roadways and airside pavement across Canada. Despite various benefits including smooth driving experience, rapid construction, as well as the high recyclability of asphalt pavement, common failures such as permanent deformation on the heavy traffic-dominated road and shear-related, distresses on airport pavement have drawn the attention of researchers and pavement engineers. During hot summer, slow-moving heavy trucks during rush hours can generate permanent deformation and shorten the pavement service life. During the long harsh winter, big diurnal temperature variations make asphalt material experience numerous freeze-thaw cycles. Various anti-icing and de-icing agent are often applied on roads and airport pavements to improve safety during these hazardous weather conditions. However, these ice control chemicals can also potentially impact the asphalt pavement in the long term. Compared with roadway pavement, the loading conditions on airport pavement are often less frequent but much higher in terms of loading. Under various aircraft ground maneuverings such as taxi, landing, and takeoff operation, airside pavement bears not only enormous vertical loading but also a significant horizontal force generated between gear tires and pavement surface when turning the aircraft. Three typical Ontario road-used asphalt mixtures were tested with the Hamburg Wheel Tracking Test to investigate the effect of different mix design parameters on the permanent deformation resistance. Industrial X-Ray CT and digital image process technology were employed to explore the morphological properties of processed two-dimensional images and their relations with the permanent deformation of the corresponding mixtures. Typical Road asphalt mixture along with airport asphalt mixture was exposed with Freeze-thaw cycle and de-icing agent, namely potassium acetate to investigate the effect of those factors would have on extreme weather conditions. The de-icing chemicals were also evaluated to examine permanent deformation and shear resistance performance through Hamburg Wheel Tracking Test and Simplified Uniaxial Shear Test. It was found that the asphalt binder PG level has a significant impact on the permanent deformation performance of roadways mixtures, the passing rate of the 4.75 mm sieve plays an important role in rutting resistance. The rutting depth and morphological indexes are not well-correlated, the possible explanations include whether the rut test can represent the actual stiffness of the corresponding asphalt mixture, the binary process might misrecognize the small particles and voids. 50% Potassium acetate liquid seems to have the softening effect on asphalt mixture’s overall stiffness for both airport and roadway mixes. De-icing treatment and freeze-thaw cycles have the potentials to induce stripping. Simplified Uniaxial Shear Tester (UST) is capable of evaluating the shear resistance of asphalt mixture. Mix type and treatments to the specimen have a significant impact on the shear performance of the asphalt mixture. A three-dimensional Finite Element model was built based on the pavement structure of taxiways in Toronto Pearson International Airport using ABAQUS, both vertical and horizontal loads were applied where nose gear and main gear contact with the pavement surface. Linear viscoelasticity was considered for engineering properties of asphalt layers. Various ground maneuverings such as landing, taxi, takeoff, zero fuel, and operating empty were simulated in the model to analyze their respective impact on shear stress and displacement distributions within the pavement structure. The results show that Shear Stress S12 generated by main gear loads is 5 times greater than that generated by nose gear on asphalt surface; Shear stress S13 generated by main gear loads is equal to that by nose gear but with an opposite direction; Shear stress S23 generated by main gear loads is almost 16 times greater than that by nose gear loads on asphalt surface layer. For shear stress S12, taxi creates the greatest level while the operating empty the lowest. For shear stresses S13 and S23 however, takeoff generates the highest stress level while empty operating generates the lowest.

Yang Liu (2021). IMPACT OF FREEZE-THAW AND DE-ICER ON THE STRUCTURAL AND FUNCTIONAL PERFORMANCE OF CANADIAN AIRPORT ASPHALT MATERIALS. UWSpace. http://hdl.handle.net/10012/16939