An Osteological Study of the Individuals Buried in Grave 3 at Wadi Faynan 100, Jordan 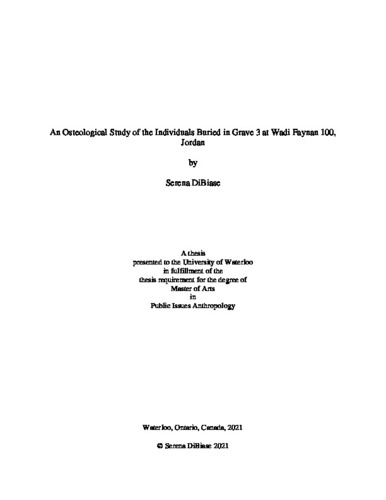 The main objective of this thesis is to address the paucity of research focussing on human remains at Jordanian archaeological sites by conducting an osteological analysis of Early Bronze Age individuals from a charnel house excavated at Wadi Faynan 100 (WF100) in Southern Jordan. This research provides the first preliminary analysis of the remains at WF100. Five graves were excavated in total during the 2019 field season, however, the remains analyzed and discussed here are from one large charnel house (Grave 3). Osteological analyses include estimation of the minimum number of individuals, sex estimates, age-at-death estimates, and observations of pathology. During excavation within these charnel houses, significant looting was noted, thus the impacts of looting are also taken into consideration when considering the human remains from Grave 3. The minimum number of individuals from the Grave 3 assemblage was estimated to be fourteen adults and eight subadults. While the fragmentary and commingled nature of this collection limits the ability to determine sex and age-at-death, the analyses for Grave 3 identified one female and two males. The age range for individuals within this assemblage is 22-40 years for adults and 6 months-14 years for subadults. The individuals of Grave 3 primarily demonstrated osteoarthritis in the vertebrae, bony growth shown on two of the phalanges and several phalanges had enlarged muscle attachments. This thesis provides preliminary insights into the lives of those interred in the Grave 3 charnel house at Wadi Faynan 100, and as such, provide a useful reference for burials to be excavated at the site, as well as laying the groundwork for comparisons between the populations of WF100 and other EB I burials in Jordan.