Investigating the Use of CRISPR/Cas9 for Genetic Screens in Drosophila 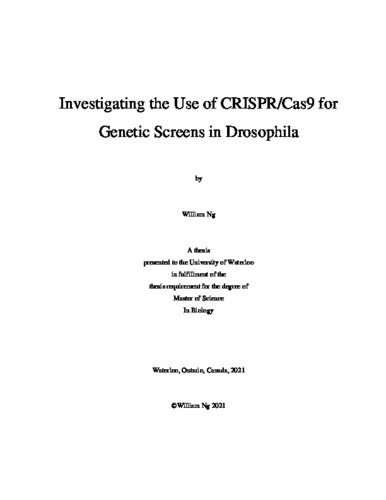 The CRISPR/Cas9 system has been adapted into a powerful tool for genetic research. The ability to target regions of a genome in a highly specific manner with a reprogrammable guide RNA has been used in a variety of applications. These applications include targeted double stranded breaks for inducing mutations or gene knock-ins, as well as hijacking the targeting ability of CRISPR/Cas9 to guide proteins to a defined sequence within the genome. These methods have been established in multiple model organisms including Drosophila. Since the establishment of the Drosophila model organism in 1909, methods have been discovered and refined to allow researchers to lay the groundwork for our understanding of eukaryotic genetics. This thesis evaluates two methods that combine previously established techniques found in the Drosophila toolbox with the CRISPR/Cas9 system and its modifications. The first is an F1 visible screen for loss-of-function mutations utilizing overexpression methods adapted from CRISPR/Cas9 technology. The second method attempts to evaluate the efficiency of creating translocations with CRISPR/Cas9 using a phenomenon called the “Dubinin Effect” which was first characterized in 1934.