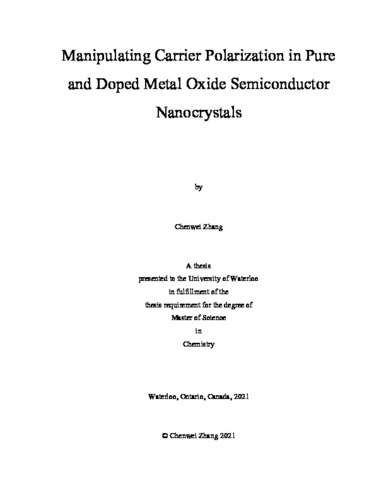 Moore's Law will soon be inadequate to keep up with the needs of technological developments as the currently used materials have reached their natural performance limits. Hence, the development of a new technology to replace traditional semiconductor electronics is imminent. Spintronics has been emerged as a promising alternative to control charge properties as well as electron spin to improve the device performance. Metal oxide and chalcogenide semiconductor nanocrystals (NCs) have generated much research due to their unique properties and relatively low cost. In contrast to noble metal nanoparticles (NPs), the semiconductor NCs with tunable free charge carrier concentration are regarded as promising materials in technological applications including multifunctional quantum devices and next-generation electronic devices. In this thesis, I investigated the magnetoplasmon resonances in antimony-doped SnO2 NCs and demonstrated the defect-related excitonic band splitting in ZnO and SnO2 NCs. In the first major chapter, I featured the influence of the synthesis methodology and post-synthesis treatment on the plasmonic properties of Sb-doped SnO2 NCs. I successfully synthesized the nanocrystal (NC) samples having various doping concentrations by two different approaches and found that Sb-doped SnO2 NCs prepared by solvothermal method display strong localized surface plasmon resonance (LSPR) in the near-infrared (NIR) region, which is absent in the coprecipitation-synthesized NCs. After the thermal annealing process, the LSPR absorption appears in the NCs prepared by the coprecipitation method, and increases in intensity in solvothermally-synthesized NCs. These NCs were investigated by magnetic circular dichroism (MCD) spectroscopy. The raise in excitonic MCD intensity coincides with that in plasmon absorption upon extending annealing durations. Furthermore, the plasmon intensity is correlated to the oxidation of Sb3+ to Sb5+ ions by using X-ray photoelectron spectroscopy. The results showcase that the synthesis approach and post-synthesis processing can significantly impact the plasmonic properties of aliovalently-doped semiconductor NCs through the dopant oxidation state. In the other major chapter, I first demonstrated the carrier polarization related to oxygen deficiencies in ZnO and SnO2 NCs. The ZnO NC samples showing various defect-related photoluminescence (PL) emission were synthesized by the non-injection method under oxidizing and reducing conditions. The as-prepared ZnO NCs present distinct variable-field and variable-temperature MCD spectra, indicating their different defect concentrations that lead to varying degrees of excitonic band splitting. Upon thermal annealing in an oxygen-rich atmosphere, the Curie-type decay associated with unpaired localized electrons vanished as shown by temperature-dependent MCD measurements, verifying the loss of paramagnetism due to the filling of oxygen vacancies. Similar to ZnO NCs, SnO2 NCs also exhibit such magneto-optical properties, and their defect-related carrier polarization and Zeeman splitting could also be controlled by synthesis conditions and post-synthesis treatment. Taken together both NC samples, the results corroborate the defect-induced carrier polarization and NC band splitting in ZnO and SnO2 NCs without introducing additional magnetic dopants. The result of this thesis provides an ability to manipulate charge carrier polarization in pure and doped metal oxide semiconductor NCs and opens up a window for the application of spintronics.