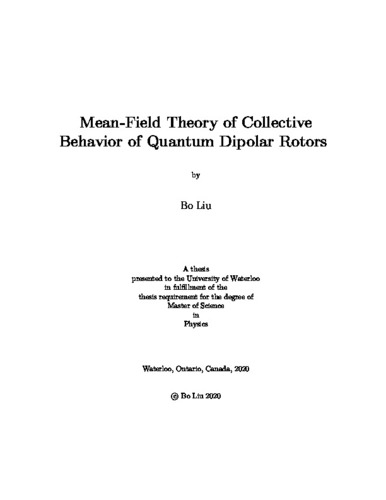 Motivated by the recent experimental measurements of the dielectric property of confined quantum dipolar molecules, the orientational dipolar ordering transition is investigated in the quantum generalization of the quantum dipole rotor model. As a result of the competition between dipole-dipole interaction and rotational kinetic energy, the confined quantum dipolar molecule is predicted to have a quantum phase transition from a disordered phase (paraelectric) to an ordered phase, which depends on the lattice structure if the dipole-dipole interaction is sufficiently strong. The quantum phase transitions of dipoles confined to the vertices of face-centered cubic (FCC) lattices and triangular lattice is studied using mean-field theory. We first study the ground state configuration using the iterative minimization method and Luttinger-Tisza method. Then, the phase diagram, as a function of the dipolar interaction's strength, is constructed. The study shows the orientational phases of quantum dipolar rotors whose properties are determined by the strength of the dipole-dipole interaction, the rotational constant, and the dipolar molecule's shape. An interesting phenomenon called reentrance is found for some symmetric and asymmetric molecules.