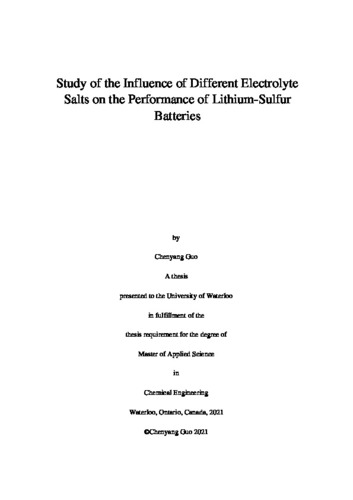 Lithium-sulfur batteries (LSBs) have advantages of extremely high theoretical specific capacity and energy density, environmental friendliness and low cost, making it one of the top candidates for the next-generation energy storage systems. However, there are still some issues that hinder the commercialization of LSBs, including low practical energy density, short cycle life and safety hazards. These issues are directly caused by the insulating properties of sulfur and its discharge products, the dissolution and shuttle of reaction intermediates as well as the unstable interface between metallic lithium anode and electrolyte. The liquid electrolyte plays a pivotal role in the operation of Li-S batteries, which provides ions and promotes the transfer of ions between the sulfur cathode and the lithium anode. Therefore, the liquid electrolyte has a great influence on the performance of LSB. While there are many lithium salts that may be suitable for LSBs, the use of lithium electrolyte salts has been limited to a few, such as lithium bis(trifluoromethanesulfonyl)imide (LiTFSI). There is still a lack of a comprehensive understanding of the performance of Li-S batteries with lithium electrolyte salts commonly used in lithium-ion batteries. Therefore, the purpose of this thesis is to study the influence of several lithium salts in the electrolyte on the specific capacity and stability of LSBs. The first part of this thesis is to systematically investigate the influence of five different lithium salts, namely, LiTFSI, lithium bromide (LiBr), lithium perchlorate (LiClO4), lithium trifluoromethanesulfonate (LiTf), and lithium hexafluorophosphate (LiPF6), in the electrolyte on the performance of LSBs. The effects of electrolytes with different lithium salts on the electrochemical performance of Li-S batteries are evaluated, including long-term cycling and rate performance, sulfur utilization, compatibility with lithium metal anode, reversibility, and redox reactions. It is found that the rate capability is highly dependent on the ionic conductivity of the electrolyte imparted by the lithium salt. Among the five lithium salts used, the battery using lithium bromide (LiBr) shows the highest initial capacity and best 0.2C galvanostatic cycling stability and sulfur utilization. On the other hand, batteries using LiBr experience overcharge and voltage fluctuations during electrochemical cycling, severe surges during cyclic voltammetry testing, and poor high c-rate performance. The second part of the thesis focuses on troubleshooting and optimization of most promising LiBr-based LSBs. Firstly, the possible causes of the overcharging and current surge problems associated with LiBr-based batteries are studied. It is found that the cathode side rather than the anode side causes the problems. By replacing the PVDF binder with a crosslinked PEI-Araldite 506 epoxy resin binder, the overcharging and current surge problems are solved. In addition, the cycling performance is improved, and the longer cycle life is achieved. Unexpectedly, the high c-rate performance is also greatly improved. Finally, cathodes with higher areal sulfur loading of 6.3 mg cm-2 using PEI-Araldite 506 epoxy resin are tested in the LiBr electrolyte. The initial specific capacity of the battery is as high as 1090.2 mAh/g-1, and it remains above 523 mAh g-1 after 100 cycles at 0.1 C. Therefore, this work provided insights on the effects of different electrolyte salts on the specific capacity, rate performance and cycle stability of LSBs, and determined that LiBr is a promising electrolyte salt for achieving improved performance of LSBs. After solving problems induced by LiBr electrolyte, a baseline research combination was established for future LiBr-based optimization work. Besides, the way those problems were solved helps contribute more insights to a common challenge that LSBs must be faced with in the process of continuous advancement, e.g., adopting the strategy to realize controllable electrodeposition of discharge products during charge in this case.

Chenyang Guo (2021). Study of the Influence of Different Electrolyte Salts on the Performance of Lithium-Sulfur Batteries. UWSpace. http://hdl.handle.net/10012/16755