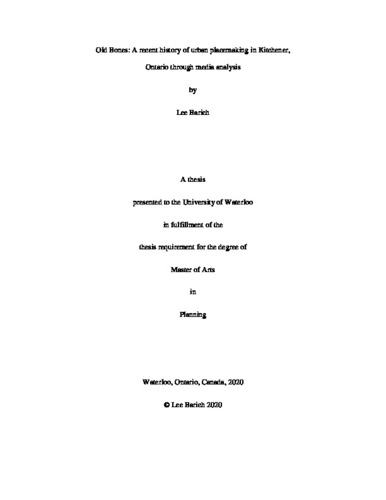 Kitchener, Ontario has experienced significant social and physical changes in its downtown in recent decades. Once an industrial hub, the City's urban core declined as suburban migration and deindustrialization gutted its economic and cultural activity. Now, the downtown sees a new light rail transit (LRT) system pass by the old brick industrial buildings where tech companies and new developments thrive. This thesis will offer a historical review as to how this transition occurred through media analysis. Newspaper archives show that this revitalization was the process of negotiating place, identity, and value amongst the City's leaders, its residents, and investors. This process revolved around the successful conservation of cultural heritage sites. Participants considered how to leverage these assets to reclaim the City's identity while also building a liveable space for its future. By exploring the important role played by heritage conservation in the City's downtown revival, readers will see how cultural assets can offer an economic, social, and cultural return on investment.