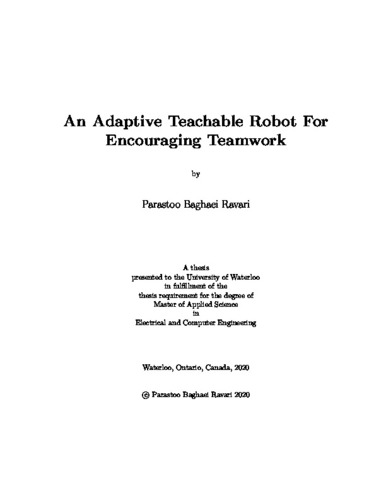 Social robots used in education can take different roles, including tutor robots and peer robots. Peer robots (also called teachable robots) take the role of a novice in a teaching interaction while the students take the role of the teacher. Teachable robots leverage learning by teaching, which has been shown in prior research to increase the students’ learning effort and time spent on the learning activity, leading to enhanced student learning. The concept of teachable robots has previously been applied for one-to-one interaction, however, to date, few studies use teachable robots in a group setting. In this thesis, we developed an adaptive learning algorithm for a teachable robot that encourages a group of students to discuss their thoughts and teaching decisions during the tutoring session. We hypothesize that the robot's encouragement of group discussion can enhance the social engagement of group members, leading to improved task engagement, learning and enjoyment. The robot adapts to the students' talking activity and adjusts the frequency and type of encouragement. The robot uses reinforcement learning to maximise interaction between the students. The proposed approach was validated through a series of studies. The first pilot study was performed in an elementary school and observed the interactions between groups of students and teachable robots. The main study investigated the feasibility of an adaptive encouraging robot in a remote setting. We recruited 68 adults, who worked together in pairs online on a web application called Curiosity Notebook to teach a humanoid robot about the classification of rocks and minerals. We measured social engagement based on the communication between group-mates, while the metric for task engagement was generated based on the users’ activities in the Curiosity Notebook. The results show that the adaptive robot was successful in creating more dialogue between group members and in increasing task engagement, but did not affect learning or enjoyment. Over time, the adaptive robot was also able to encourage both members to contribute more equally to the conversation.