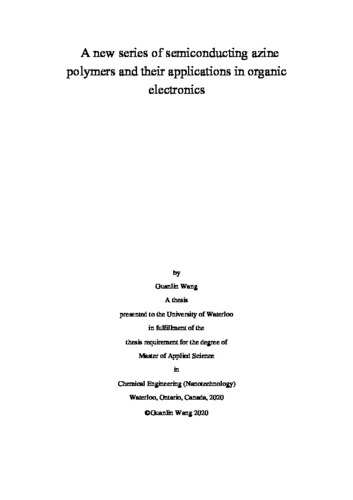 The rise of renewable energy and the urgency of sustainable development make organic solar cells (OSCs) or organic photovoltaics (OPVs) valued. Among so many donor materials for bulk heterojunction structure, P3HT is one of the most common donor polymers which is cost-effective and has been studied deeply. The room and potential for the improvement of OSCs based on polythiophene material still need further research. Therefore, Poly(4,4’-didodecyl-2,2’-bithiophene-azine) (PDDBTA), a new semiconducting azine polymer was synthesized in only three steps. As a p-channel material, PDDBTA showed hole mobilities of up to 4.1  10-2 cm2 V-1 s-1 in organic thin film transistors (OTFTs). As a donor in organic solar cells (OSCs), a 2.18% of power conversion efficiencies (PCEs) was achieved, which was the first example to use an azine-based polymer to fabricate organic photovoltaics (OPVs). These performances indicate the potential of bithiophene-azine polymers as a new type of low-cost semiconductor materials for OPVs and other organic electronics. The performances of OTFT and OPV devices have reached the same level as those fabricated with P3HT. However, the morphology of the active layer mixed by PDDBTA and PCBM was relatively unsatisfying due to the poor solubility and high crystallinity nature based-on a straight longer side chain, which had an adverse effect to charge transport and charge collection of the active layer, thereby limited the JSC and FF. In order to increase the solubility to form a better blend film morphology and lower the aggregation caused by high crystallinity, as well as obtain a better phase separation and maintain the original performance of PDDBTA, a branch sidechain polymer PDEHBTA and a shorter straight sidechain polymer with pyrrole units as backbone PHPA were synthesized. However, the low molecular weight of these two types of optimized structures became an obstacle that hindered the OPVs to gain a satisfactory JSC and FF, and only 1.58% of PCE based on PDEHBTA OSCs and 1.1% of that fabricated with PHPA were obtained, respectively.