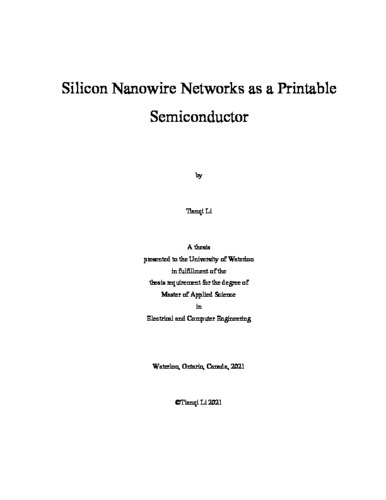 Printed flexible electronics is gaining in popularity and is used in applications such as flexible displays, wearable medical devices and the internet of things. Compared to traditional silicon device manufacturing technologies, printed flexible electronics overcomes the limitations of mechanical rigidity, as well as imposes advantages such as simplified manufacturing requirements, less material consumption, lower fabrication costs, and lighter- weight devices. Satisfactory printable dielectrics and conductors exist, but printable semiconductors remain a challenge. Most often printable semiconductors are organic based, but these materials suffer from low mobility and short lifetime. Inorganic materials have much better electronic properties and higher stability but are typically not printable. Nanowires, which can be synthesized as single crystals on one substrate then dispersed in an ink, provides a solution to print inorganic semiconductors, including silicon. In this thesis, solution- processed silicon nanowire networks are evaluated for printed electronics. A nanowire network is a mesh of randomly oriented nanowires, for which no alignment is needed and thus fabrication is simple. Since nanowires are much longer than nanoparticles, there are less junctions in a nanowire network compared to a nanoparticle film, ideally resulting in less scattering and better electrical performance. To fabricate silicon nanowire networks, the first step is to synthesize silicon nanowires and metal-assisted chemical etching was chosen for its solution compatibility, high quality nanowires, simplicity and cost effectiveness. Various parameters in metal deposition and chemical etching were explored and silicon nanowires with homogeneous diameters of 100 nm and lengths of up to 62 μm were successfully obtained. Dispersion of these silicon nanowires in a solution was examined next through ultrasonication. To minimize nanowire agglomeration, a simple method was demonstrated for the first time whereby the nanowires on the growth substrate were transferred directly to the dispersion solvent from the etching solution. This avoids the capillary forces at the liquid-vapor interface during drying. Different dispersing factors were individually tested to maximize the length and minimize the agglomeration of silicon nanowires in solution. Three printing techniques were explored to print networks of silicon nanowires: drop casting, rod coating and transfer printing through vacuum filtration and membrane dissolution. This represents the first time silicon nanowire networks were rod coated and this method was found to be a feasible approach to print silicon nanowires that is compatible with the large- scale roll-to-roll printing needs in industry. However, one limitation was observed, which is the need of formulating a higher concentration silicon nanowire ink while maintaining minimal agglomeration. After printing silicon nanowires networks, they are further processed and incorporated into a thin film transistor (TFT) for electrical characterization. Annealing treatments on the nanowire networks at different temperatures were explored, with 400 ̊C for 1 min yielding the best electrical performance. An ION/IOFF ratio of ~105 was obtained for the transistors. Overall, the synthesis and printing of the nanowires was successful and compatible with the needs of printed, flexible electronics. The field effect mobility of the nanowire networks was poor however, which is attributed to the oxide existing at the nanowire junctions and between the nanowires and the metal contact as well. Strategies to control and remove this oxide is outlined and discussed as future work.