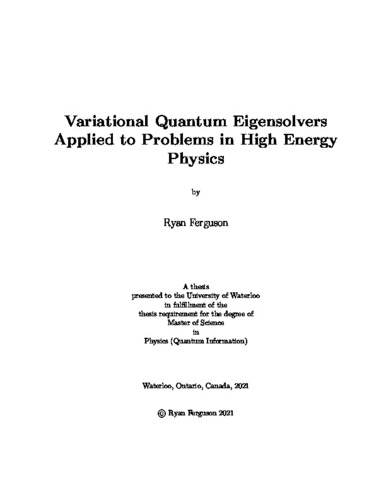 Variational methods have long been used to study strongly-correlated quantum systems. Despite the successes of classical protocols, these are limited in the study of quantum systems, either due to numerical errors like the sign problem or the massive memory requirement to represent large quantum systems. Variational quantum eigensolvers (VQEs) overcome these problems and as a result have been an exciting area of research for the past decade. VQEs use a hybrid classical-quantum set-up, where a cost function (usually the expectation value of an operator) is produced by the quantum processor and then optimized on a classical computer. VQEs have been applied to fields such as quantum chemistry, condensed matter physics, high-energy physics, and classical optimization problems. In this thesis, we investigate VQEs to study gauge theories, which describe fundamental physical interactions and are hard to simulate classically. We use two different approaches in implementing a VQE to study two classes of problems. In the first half of the thesis, we design a VQE to study the U(1) Higgs gauge theory in one spatial dimension. This model is particularly interesting due to the presence of a topological term, which is a candidate to explain the observed CP violation in the universe. In order to perform a quantum simulation of the U(1) Higgs model, the theory is cast on a lattice. In the limit where the lattice size is large and the lattice spacing is small, the continuum limit can be reached and the results correctly resemble the original theory. However, when the lattice is too small or the spacing too big, results are spoiled by finite size effects. In this thesis, we investigate the effects of a finite lattice and determine the parameters to correctly reproduce a first-order phase transition of the continuous theory. Importantly, to resemble a realistic experiment, we include the statistical and intrinsic quantum noise in our VQE. We design the protocol to be applied on a microwave-photonic platform, which is well-suited due to the bosonic nature of the theory's electrical modes. In the second half of the thesis, we design a new class of VQEs, based on a measurement-based quantum computer (MBQC) instead of the typical circuit-based set-up. Rather than performing gates on an initial state, a MBQC transforms an initial state by entangling it with a number of auxiliary qubits which are subsequently measured, resulting in a modification of the initial state. In this part of the thesis, we compare the standard, circuit-based VQE with our newly-designed measurement-based VQE (MB-VQE) through two meaningful examples. First, we introduce a novel way to construct variational state families, using measurement-based techniques, that is more costly to access with circuit-based VQEs. We apply this technique to find the ground state of a two-dimensional, periodic Z2 matter-free lattice gauge theory. In the second approach, we directly translate the circuit-based VQE to a MB-VQE and apply this to the U(1) Schwinger lattice gauge theory, which is used as a benchmarking problem for VQEs. These examples demonstrate that there are specific problems which are better suited for a MB-VQE.