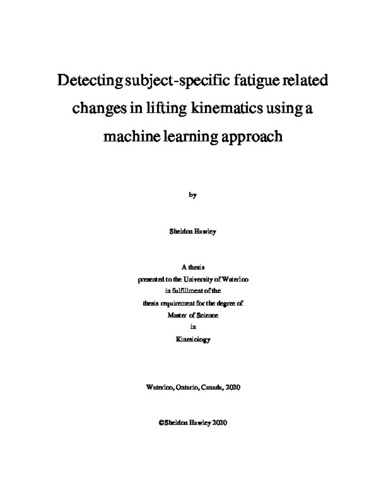 Background. Functional capacity evaluations (FCEs) are used to determine a worker’s capacity for return to work (RTW) or for job matching purposes. FCEs are completed using a subjective approach, where a trained evaluator will determine the capacity of a worker by monitoring for changes in movement patterns as the worker completes manual material handling tasks. It is well established that movement patterns change as workers become fatigued, explaining why evaluators are trained to watch for such changes; however, the current subjective approach used in FCEs assumes that everyone changes in the same way. In part due to the subjectivity of capacity determinations, the predictive validity and reliability of FCEs to produce accurate RTW outcomes has been questioned (Reneman, 2003). Therefore, an objective and personalized approach to detecting the onset of fatigue is needed. Machine learning may provide such an approach, specifically using an outlier detector algorithm. Objective. To determine if one-class support vector machines (OCSVM), an outlier detection machine learning algorithm, can be utilized to objectively identify fatigue during repetitive lifting on a subject-specific basis. Methods. Fourteen participants completed a repetitive lifting protocol for 60 minutes or until volitional fatigue. Whole-body kinematics were recorded using a 3D motion capture system (Vicon, Oxford, UK). Ratings of perceived exertion (RPE) and heart rate (HR) were recorded after every 15 lifts. A whole-body kinematic model of each participant was created in Visual3D, where trajectory data from15 landmark locations were exported for each lift. For each participant, lifts were separated into a training set and multiple test sets. The training set consisted of approximately the first 35% of lifts, and the test sets were subsequent sets of 15 lifts. Principal component analysis (PCA) was used as a data reduction and feature extraction method and applied to the training set. The PC scores from the training set data were used as features in a OCSVM. Test set data were projected back onto the training set principal component (PC) feature space. Test set PC scores were then classified against the decision boundary defined by the OCSVM. The percentage of PC scores from each test set that were beyond the boundary (“outliers”) was calculated. Spearman’s rank correlation (ρ), a nonparametric test, was used to assess the association between RPE, HR and the percentage of outliers in each test set. Results. Significant positive associations between RPE and the percentage of outliers were detected in seven of the ten participants who were likely fatigued based on their RPE. Only two of eight participants who were likely fatigued based on their HR had significant positive associations. All participants who were not likely to be fatigued had no significant association between either RPE or HR and the percentage of outliers. The OCSVM did however reveal changes in movement patterns from baseline for some participants who did not fatigue. Conclusion. The application of OCSVMs identified significant changes in movement patterns from baseline in those who experienced fatigue from a repetitive lifting protocol. Although no significant associations were identified in those who were not fatigued, the OCSVM still identified movement pattern changes. These results show support for use of an outlier detection tool to aid in FCE assessments to potentially reduce subjectivity, supporting improved RTW decision making.