Exploring the Structures and Properties of Cationic Aromatic Clusters 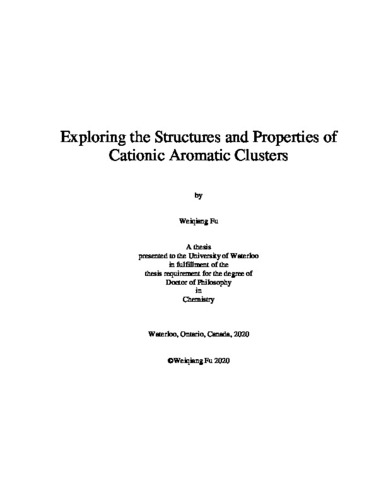 In this thesis, the structures and properties of protonated aromatic clusters have been investigated. The aromaticity of the phenyl ring can be influenced by the substituents. Electron withdrawing groups (EWGs) can reduce the electron density of the phenyl ring, while electron donating groups (EDGs) can donate their electron density to the π systems. Therefore, the charge density distribution of molecules containing the phenyl rings can be affected by the substituents, which can cause multiple potential protonation sites and the variation of structures and properties of the aromatic compound derivatives. A variety of aromatic clusters have been studied in this thesis in combined experimental and computational methods. A computational study of the proton-bound heterodimer of Phe/Ser has been conducted. The cosine similarities between each isomer were calculated, which was applied to partition the potential energy surface (PES) via hierarchical clustering. The cosine distances between the calculated spectra and experimental UV/IR double-resonance spectra were also calculated to assign the structures to each experimental spectrum. The same computational method of hierarchical clustering and spectral comparison was applied to study proton-bound homodimers of Phe derivatives. By changing the positions and types of the substituents on the phenyl ring, the effects of substituents on the structures and binding motifs were investigated. Infrared multiple photon dissociation (IRMPD) was utilized to produce experimental spectra for these homodimers in the gas phase. Para-substituted benzylpyridinium (BP) ions were also studied. The UV photodissociation (UVPD) action spectra of these species were measured via our modified DMS instrument. The absorption energies were found to be tuned by the substituents, and correlate with Hammett constants and electrophilic substituent constants. Last, two protomers of para-aminobenzoic acid (PABA) were examined via the UVPD spectroscopy study. PABA can be protonated at carbonyl oxygen (O-protomer) or amine nitrogen (N-protomer) under different electrospray solvent conditions. These two protomers were separated by the DMS cell and then irradiated by UV light. The two protomers showed distinctive UVPD action spectra. The simulated electronic absorption spectra were calculated using the vertical gradient Franck-Condon approach, and then compared with the experimental UVPD action spectra.