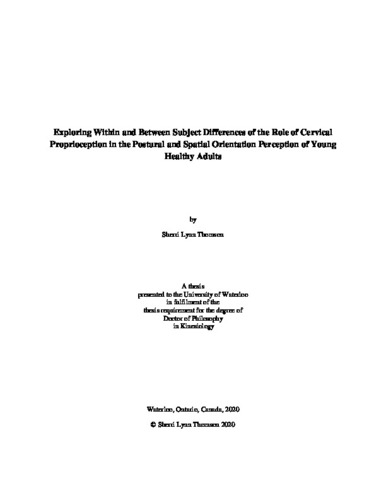 A proportion of physiotherapy patients with neck pain, either from idiopathic or traumatic causes, will report symptoms of dizziness and postural imbalance in the absence of additional pathology. The term cervicogenic dizziness, used to describe this presentation of symptoms, remains a controversial diagnosis largely due to the lack of a diagnostic test and an apparent lack of consistency between neck pain and symptom severity. Although mounting evidence suggests that cervical proprioceptive information may play a larger role in balance control than previously believed, its precise role and the reason why some individuals seem more impacted when this information is disrupted, remains a topic of debate. Therefore, this thesis aimed to explore the fundamental understanding of how cervical proprioception information is used in the formation of a body schema and therefore may help in referencing the information provided by the visual, vestibular and body proprioceptive systems used for balance control. This current foundational work is delimited to a focus on healthy adults. The studies in this thesis sought to; 1) examine the impact of altered cervical proprioception on postural and spatial orientation perception and standing balance, 2) investigate the importance of between subject differences in cervical proprioception as it relates to balance control and 3) explore person specific characteristics that may impact on cervical proprioception and the extent to which it impacts on balance control at a person specific level. There were three predominant findings in this thesis. The first was that altering cervical proprioception using unilateral dorsal neck vibration significantly impacts on postural and spatial orientation perception involving the perception of head and elbow orientation, and visual vertical perception. The second finding is the existence of significant between subject differences in cervical proprioception performance, as measured by joint position error mean and SD. The third main finding from this thesis is that person specific characteristics may impact on cervical proprioception, as seen in differences in cervical JPE as well as the extent to which neck vibration impacts on cervical JPE. In addition, this thesis also explores the use of portable technology as tools for evaluating cervical JPE and visual vertical perception error, while suggesting how this information may be used to inform on physiotherapy assessment and treatment of individuals with suspected cervicogenic dizziness in a clinical setting.

Sherri Thomson (2020). Exploring Within and Between Subject Differences of the Role of Cervical Proprioception in the Postural and Spatial Orientation Perception of Young Healthy Adults. UWSpace. http://hdl.handle.net/10012/16506