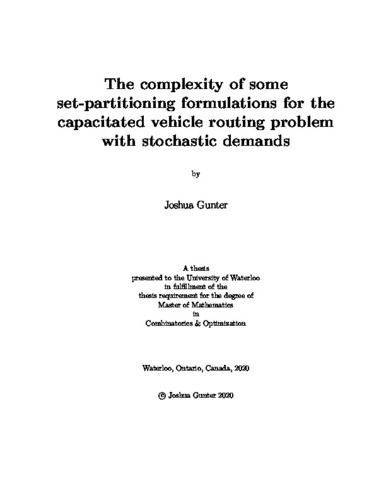 The capacitated vehicle routing problem with stochastic demands (CVRPSD) is a variant of the deterministic capacitated vehicle routing problem (CVRP). The CVRP consists of planning routes for vehicles with a given capacity to deliver goods to a set of customers with known demands, with the goal being to find the cheapest such set of routes. In the CVRPSD, rather than being deterministic, customer demands are random variables from a given probability distribution. This creates the possibility of route failures, where the realized demand on a route is greater than the vehicle capacity. In this event, a recourse action following a pre-determined strategy must be taken. The goal is then to minimize the expected cost of the routes, i.e. the sum of the deterministic route lengths and expected additional costs incurred by recourse actions. A common approach when solving the CVRPSD is to formulate it as a 2-stage stochastic programming problem. In this framework, the first stage is planning a set of routes, while the second stage is computing the expected cost of route failures. While edge-based formulations were the dominant approach originally, the success of set-partitioning formulations for related problems such as the CVRP and the vehicle routing problem with time windows led to research into developing similar formulations for the CVRPSD. These formulations contain an exponential number of variables, necessitating the use of column generation to solve them. In column generation, an additional optimization problem known as the pricing problem needs to be repeatedly solved when solving the current LP relaxation through the branch-and-bound tree. The pricing problem for the deterministic CVRP is strongly NP-hard, and so to obtain tractable algorithms a relaxed version of the pricing problem which can be solved in pseudo-polynomial time is typically used. Similar methods for relaxing the pricing problem have been explored for the CVRPSD, but these make use of some simplifying assumptions for computing the expected cost of route failures, which needs to be done frequently when solving the pricing problem. In this thesis, we show that using these assumptions results in an ``approximate" pricing rather than ``exact" pricing, and present results on the hardness of performing exact pricing for set-partitioning formulations for the CVRPSD. Specifically, we show that when customer demands are given by a finite set of demand scenarios, exactly solving the pricing problem for the CVRPSD is strongly NP-hard. Additionally, we show that when customer demands are independent normal, under some assumptions there is a reduction from the Hamiltonian cycle problem to the pricing problem for the CVRPSD. This does not constitute a proof of strong NP-hardness due to the aforementioned assumptions required, but does suggest that even in this case the pricing problem may be harder than currently thought.

Joshua Gunter (2020). The complexity of some set-partitioning formulations for the vehicle routing problem with stochastic demands. UWSpace. http://hdl.handle.net/10012/16479