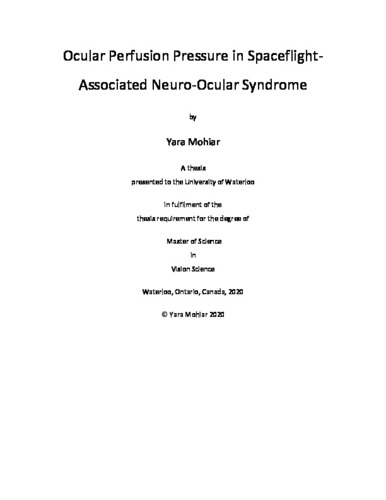 Purpose: Spaceflight associated neuro-ocular syndrome (SANS) is considered by the National Aeronautics and Space Administration (NASA) as one of the most significant barriers to long term space exploration (Larkin, 2018). Its main features include posterior globe flattening, hyperopic shifts, choroidal and retinal folds, cotton wool spots, and optic disc edema (Lee, Mader, Gibson, Brunstetter, & Tarver, 2018). Currently, it is confined to males and its cause remains unknown (Mader et al., 2011). While there are terrestrial diseases with features similar to SANS, none of them completely match the syndrome. Understanding the mechanisms of these diseases as well as the relationship between IOP, eye size, gravity, ocular and systemic fluid dynamics, and ICP is vital to understand and develop ways to prevent, modulate, and treat SANS. A relatively new and unexplored possible contributor to SANS is ocular perfusion pressure (OPP). The purpose of this thesis is threefold: (1) To explore the effect of head-down tilt (HDT); a popular analog for spaceflight, on OPP, (2) to determine the effect of HDT on IOP, and (3) to determine the effect of sex on OPP and IOP. We hypothesize that OPP and IOP will vary in a statistically significant way with body position and sex. Methods: The right eye’s IOP was measured by Tonopen XL and mean arterial pressure (MAPheart) was measured continuously by the Finapres Nova System’s finger cuff which recalculated blood pressure at the brachial artery. To calculate MAPeye, MAPheart and the distance between the heart and eyes were obtained for 10 participants. Measurements were taken in 4 body positions: sitting, supine, 12° HDT and 30° HDT. Participants (19-41 years old) spent 5 minutes in the first two positions and approximately 25 minutes in the last two tilts. OPP was calculated for the various body positions. Additionally, available non-invasive ICP measures for 9 of the participants were examined in relation to OPP and IOP. Data were analyzed through a mixed ANOVA. Outcome variables were: OPP, IOP, MAPheart, MAPeye, ICP and translaminar pressure difference (TLPD) for the IOP/ICP mismatch. Results: Six men and four women completed the experiment. OPP & IOP were found to significantly increase with tilt angle (P< 0.001) statistically. OPP increased from 55.26 at baseline to 86.7 at 30° HDT while IOP increased from 14.1 to 22.2 at 30° HDT. We also found a statistically significant IOP/ICP mismatch (p= 0.013) between 12° HDT and 30° HDT as TLPD decreased by 10.24 at the last tilt. Within the power of our sample sex had no statistically significant effect on any variable (p> 0.05). Conclusions: Our findings show that OPP increases sufficient to compromise autoregulation do occur with change in body posture indicating a possible mechanism for the observed ocular changes that occur during spaceflight. In addition, it appears that an IOP/ICP mismatch may occur at high levels of tilt. However, as our findings are acute, further investigation is needed to determine long-term effects of HDT on OPP as well as the effects of lower body negative pressure (LBNP) devices and the minimum duration LBNP that would be required to protect the eyes.