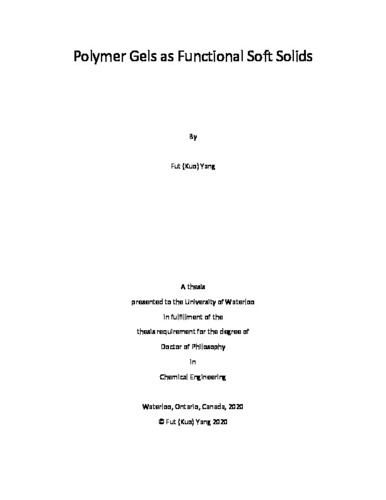 Polymer gels are polymer networks suspended in a liquid where chemical or physical crosslinks of the network maintain the physical form of the gels. They are a hybrid material that is between a liquid and a solid, making them unique among other solid matter. Gels are a common part of our lives with examples ranging from contact lens we use, noodles that we eat, to our very own biological tissues. Despite their ubiquitous nature, these materials have only recently been viewed as soft solids suitable for load-bearing applications due to advances in gel mechanics. While gels are generally fragile due to their low solid content, these advances demonstrated that through proper designs of the polymer network, one can impart gels with desirable properties such as high toughness, high stretchability, and self-healing, all without increasing the solid content. These properties allow the mechanical performance of gels to approach or even exceed that of pure solid materials. Consequently, gels have become a suitable and promising soft material candidate for rapidly growing fields in soft robotics and electronics, adhesion and adhesives, and biomedical engineering. To accommodate their increasingly sophisticated applications, these fields demand their materials to be highly functional, with material capabilities including actuation, stimuli-responsiveness, and shape memory effect. As a result, the aim of this thesis is to further explore polymer gels as functional soft solids by intersecting the design of gels with known scientific phenomena or principles to generate useful new properties. First, we exploited the noncovalent interactions in gels and apply the concept of molecular recognition, commonly found in biological systems, to make a universal mussel-inspired nanoscale coating (polydopamine) into a “molecular double-sided tape” for the bonding and assembly of hydrogels (calcium-alginate, polyacrylamide, and polyvinyl alcohol) via non-covalent interactions. By incorporating and subsequently removing noncovalently interacting molecules that share the molecular characteristics of the hydrogels during coating formation, we imparted molecular conformations to the coating that are affinitive to the hydrogels. These conformational changes significantly enhanced (by about 2-3 folds) the interfacial adhesion between the coating and hydrogels, allowing one to adhere hydrogels to different material surfaces with bonding strengths up to two orders of magnitude higher than if the bonding was performed directly on the bare surfaces without the coating. From a scientific perspective, this result illustrates that molecular recognition can be extended to recognize macroscopic materials beyond specific microscopic molecular structures. Additionally, it confirms the effect of molecular conformation on adhesion, which has historically baffled adhesion science. From a technical perspective, we designed experiments to further explore its potential practical applications. We demonstrated that by using a tougher hydrogel and following the bonding mechanics of mussel byssus, we could incorporate energy dissipation to further leverage the enhanced interfacial adhesion, showing that our approach can be useful in biomedical applications such as for the joining of artificial tendons. Second, we leveraged the properties of liquid in gels and employed the phenomena of supercooling to resolve the engineering paradox of achieving both shape adaptability and load-bearing capability in materials science. A liquid can supercool and remain fluid below its freezing point due to the high energy barrier associated with the formation of “ice” crystals. This barrier effectively gives the liquid a metastable supercooled liquid state and a stable crystalline solid state that can be reversibly switched. By converting a supercooled liquid (melted sodium acetate trihydrate) into a gel by forming a polymer network (polyacrylic acid) in the liquid, the resulting gel has two stable and reversible solid states, making it one of the first solid materials with such behaviors. With the associated change in fluidity/rigidity of the liquid and the close molecular integration between the liquid and the polymer, the resulting gel attained a change in stiffness up to 104¬ times between the two states under the same environmental conditions, making the gel desirable for advanced applications. To this end, we have designed and performed experiments to demonstrate the potential of this material for applications including mechanical energy storage, stimuli-responsive smart construct, solid adhesive, shape memory material, and 3D printing.