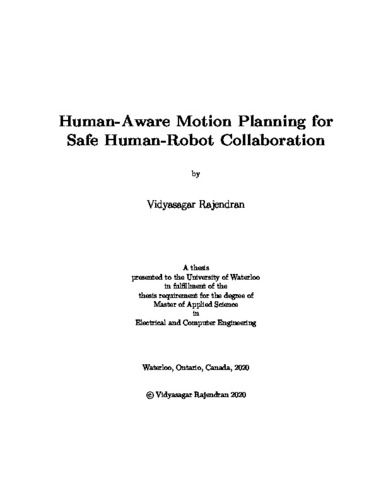 With the rapid adoption of robotic systems in our daily lives, robots must operate in the presence of humans in ways that improve safety and productivity. Currently, in industrial settings, human safety is ensured through physically separating the robotic system from the human. However, this greatly decreases the set of shared human-robot tasks that can be accomplished and also reduces human-robot team fluency. In recent years, robots with improved sensing capabilities have been introduced and the feasibility of humans and robots co-existing in shared spaces has become a topic of interest. This thesis proposes a human-aware motion planning approach building on RRT-Connect, dubbed Human-Aware RRT-Connect, that plans in the presence of humans. The planner considers a composite cost function that includes human separation distance and visibility costs to ensure the robot maintains a safety distance during motion while being as visible as possible to the human. A danger criterion cost considering two mutually dependent factors, human-robot center of mass distance and robot inertia, is also introduced into the cost formulation to ensure human safety during planning. A simulation study is conducted to demonstrate the planner performance. For the simulation study, the proposed Human-Aware RRT-Connect planner is evaluated against RRT-Connect through a set of problem scenarios that vary in environment and task complexity. Several human-robot configurations are tested in a shared workspace involving a simulated Franka Emika Panda arm and human model. Through the problem scenarios, it is shown that the Human-Aware RRT-Connect planner, paired with the developed HRI costs, performs better than the baseline RRT-Connect planner with respect to a set of quantitative metrics. The paths generated by the Human-Aware RRT-Connect planner maintain larger separation distances from the human, are more visible and also safer due to the minimization of the danger criterion. It is also shown that the proposed HRI cost formulation outperforms formulations from previous work when tested with the Human-Aware RRT-Connect planner.